EU politics: nothing worth cheering about 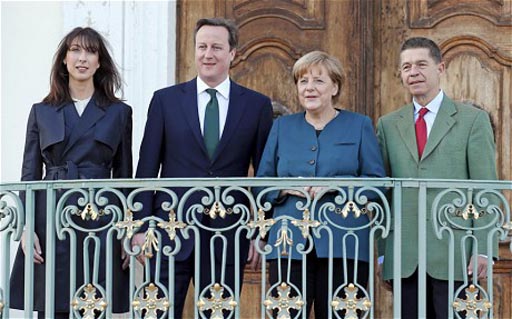 One might have thought that, if Mr Cameron's weekend jolly to Frau Merkel's schloss was at all important, the German press would have been all over it. But as far as I can see, only Die Ziet is taking it seriously enough to offer a report.Reading the report, you can see why so few bothered. It is an amalgam of the same old, same old: the British prime minister wants Angela Merkel's support for EU reform but, as always, is at pains to assure the German chancellor that the Britain will continue to participate fully in Europe and has no intention of leaving the EU. Whatever is agreed at this meeting, you can bet your sweet life that there will be no crowds waiting at the airport for Mr Cameron's return. There would be little point in his waving a piece of paper – nobody is in the least bit interested. Actually, I tell a lie. Andrea Leadsom MP is brown-nosing in the loss-making Guardian, burbling about "eurosceptics" in the Conservative party being "willing to compromise over their demands for European Union reform". There is no one in the party, she says, who wanted Cameron to "lay down the law" to Britain's EU partners and that compromise was "essential".Elsewhere, we get a report that the Tories are planning to build a "secret alliance" with the AFD. Given that this new German group is pro-EU and anti the euro, it fits exactly with the official Tory view. All these less than scintillating developments are doing, therefore, are reinforcing the europhile credentials of David Cameron, who seems to have abandoned any attempt to woo the outers, and is thus no longer concerned to capture the lost ground from UKIP. That much in itself is something of a development. In the past, Tory leaders at least used to pretend that they wanted the eurosceptic vote. But now, Cameron seems not to be concerned in the slightest that his party is haemorrhaging support, even to the extent seemingly being prepared to throw away the coming local elections. In truth, though, there is very little Cameron can do. Despite comments to the contrary, Die Zeitmakes it very clear that Merkel will not countenance a treaty renegotiation, and nor will she consider treaty amendments until her re-election is safely in the bag – should that happen. Thus, says this paper, Cameron's only real option is to put a "yes/no" referendum to the country, without first having sought treaty revisions. And since there is no chance of him even considering that, he is left with the wholly unconvincing ritual of talks with European leaders about reforms that are never going to happen. Missing from the feast, of course, is Ed Miliband. The earlier presumption that he would follow in the path of Mr Cameron has not materialised. There is no sign at all that he is prepared to commit to an EU referendum. 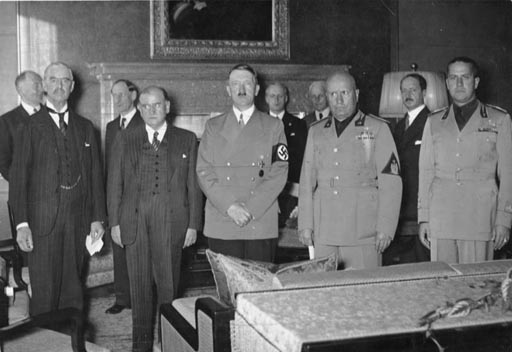 Perversely, it is almost exactly 25 years from Margaret Thatcher's Bruges speech, and 75 years since the Munich agreement, when Chamberlain returned to Heston Airport to wave his infamous piece of paper, neither of which anniversary of our former prime minister lived to see.

Thus do we return to a strange no-man's land, where the actuality of a referendum is receding and the "Europe" issue is still no closer to a resolution. Let us hope that we do not have to wait for the hundredth anniversary of Munich before we see a prime minister returning from a meeting with a German chancellor with a piece of paper worth cheering about.