UK politics: a swaggering we will go 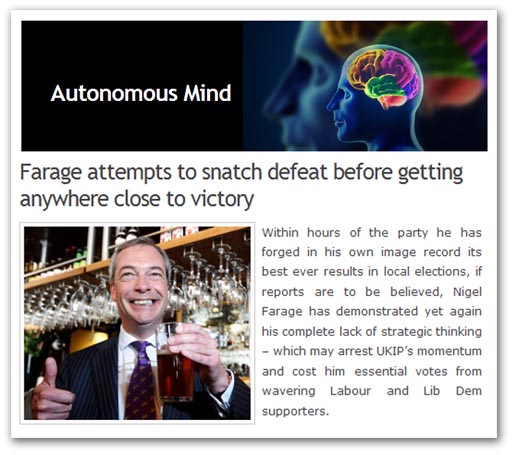 Says The Times peeping from behind its paywall: "A swaggering Nigel Farage told jittery Tories that he might help them to retain their seats if they got rid of David Cameron".
One appreciates, though, that with the Farage-mania at its height, one is not supposed to criticise the anointed one, but the news has not reached Autonomous Mind. He is not at all impressed. Furthermore, a correspondent thinks Farage may have reached the pinnacle of his hubris. When the dust dies down and the Conservatives stop panicking but look around, writes my correspondent, they will see that UKIP does not have all that much to offer by way of an agreement. But, more to the point, will the party members really like the idea of getting rid of their elected leader because another and much smaller and less important party is demanding it? AM makes the point that Farage has also undermined UKIP's apparent appeal as an entity that stands apart from the discredited three main parties; for instead of occupying the high ground above the political class in the eyes of jaded voters he has instead signalled his desperation to join with them. UKIP candidates who enjoin voters to reject the Lib-Lab-Con will now have to explain why given UKIP's plan is to cosy up to the Conservatives, AM adds. One might venture that this seems to be a case of "vote purple, get blue".Tory MP Peter Bone certainly seems to think this is the case. UKIP's success, he says, made the case for an alliance between the two parties that would see them fielding a joint candidate. "There was a tremendous Conservative vote", Bone adds. "There were the conservatives that voted Conservative and the conservatives who voted UKIP. The trick is to get us all together again and that's what we've got to do".The real trick, though, is how Farage will handle his new bestist friends and their ideas for a "mandate referendum". Is the golden boy in favour of renegotiation? I think we should be told. COMMENT: COMBINED ELECTION THREAD
Posted by Richard at 17:35