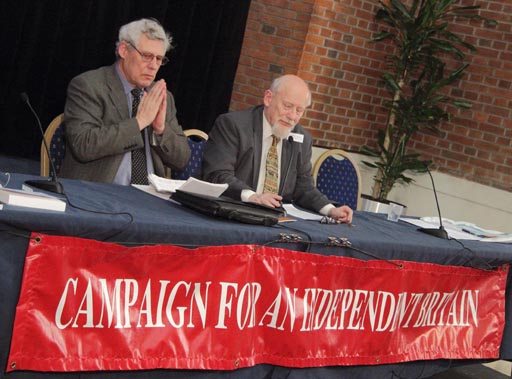 I expected a certain amount of hostility when I raised the issue of turnout at the Campaign for Independent Britain meeting yesterday. But when I pointed out that the vote was shrinking, suggesting that this contradicted claims of a popular movement "on the march", I got a general murmur of agreement.To judge by some reaction though, while Farage is to lauded for his "plain speaking" and "straight talking", that same freedom should be denied to anyone wishing to look beyond the media hype. Even Autonomous Mind is enjoined to get behind "the only team in town" and to "stop the continual sniping at UKIP". The anointed one's party, it seems, must be exempted from the normal process of critical analysis, as we bow down and hail the stupendous victory of The Great Leader. Actually, though, Booker is right. He sees in the "surge" for the Farage Pothole Party not any great support for the party itself, but a reaction to the behaviour of the political classes – a Europe-wide reaction which is reflected in the growth of dissident parties in Germany, Austria, France, Italy, Spain, Greece and elsewhere. In some senses, it perpetuates the continued degradation of the voting system, which is supposed – in theory – to pick the best individual candidate to represent the voters in their areas. In some cases we have seen elected "paper" candidates with no political experience, representing a party which has no track record in local government. In other words, the vote was not so much for UKIP as against the political classes, something which was picked up by Martin Hill, the Conservative leader of Lincolnshire county council. Heacknowledges that UKIP has successfully "plugged in" to this issue of EU migrants. Unease about this social change has been worsened by a feeling that Westminster is not listening to voters or speaking their language, particularly in rural areas, he suggests. "People feel there is a political elite a bit divorced from ordinary people", Hill adds. "On the doorstep, it wasn’t the policies, it was about the feeling of the disconnect".This distinction is incredibly important when it comes to trying to understand the nature of the processes we are witnessing, which are otherwise swamping by the media chatter which is no more accurate nor perceptive than it ever has been. Crucially, we see in the response to Farage, renewed calls for a referendum, and even the idea of a "mandate referendum". This some Conservatives MPs want as early as next May, in which the public will be asked whether they want the government to negotiate a "new relationship with the EU based on trade and political co-operation".Slated as a "UKIP killer", if this gathers a head of steam, it is very dangerous for the eurosceptic movement as a whole.

To reject the very idea of such a referendum invites the claim that people are not interested in "Europe", to refuse a mandate is to suggest that we are happy with the way things are, and to vote "yes" gives the prime minister a spurious authority for something he can't do anyway.

On the other hand, the very last thing we want is an "in-out" referendum - which we would be certain to lose, setting back the movement for a generation. If Mr Cameron had any sense, he would offer just that, calling Farage's bluff and lancing the boil.

And it is here that the criticism of Farage is strongest - and rightly so. Ten years ago, many of us were arguing with the man that UKIP needed to develop a credible exit plan.

Ten wasted years later, the party still does not have a credible exit plan. Furthermore, last Thurday's "success" brings us no closer to getting one. Nor indeed does the party have a strategic plan to secure our withdrawal from the EU – other than perhaps getting the anointed one to Number 10 where he can wave a magic wand and lead us to the sunlit uplands.

Yet, to point out that a possible (and likely) outcome of Farage's long-term dereliction is to lead us blindly into a referendum contest that we cannot possibly win is seen by is growing band of acolytes as heresy and even worse.

But, without a plan, without a strategy, we lose. Farage's disparate bunch of amateurs are up against real professionals. Confronted with the might of the media, the political establishment, the wealth of corporate business and the power of the EU, our chances of winning a referendum always were slight. For all the energy and funds expended on the Farage folly, all we might have achieved is one step closer to annihilation.

In my next post, therefore, I will sketch out the bones of a plan, offering ideas of how we can actually go about getting ourselves out of the EU, ideas which I set out to the CIB yesterday.

Photograph courtesy of David Wilkinson, with thanks.