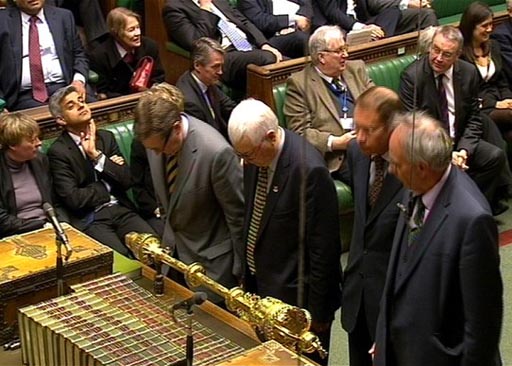 I'm not quite sure when the practice stopped but certainly before the war, an important debate in Parliament would get at least two full pages of coverage. And that was in the days when the likes of the Daily Express was a broadsheet. The reports, in eight, densely-printed columns, with only tiny pictures, would run to several thousand words.
Now, we just get the highlights, which means the flavour of the debate comes via the filter of the reporters covering the story – and most often they are either working from agency reports, or broadcast highlights. There is, however, some compensation in that we can watch the debates live and read the Hansard reports later. I prefer to do the latter, finding the written word more reliable without the distraction of the theatricals. Thus, while the MPs were chuntering at each other this evening, I was actually watching a decade-old episode of West Wing on the internet. I'll read the full debate tomorrow. Anyway, the headline news is that 114 Conservative MPs voted for John Baron's amendment to the Queen's Speech "expressing regret" that an EU referendum Bill had not been included in the Government's legislative programme for the next session. This is slightly more MPs than had been anticipated but, nevertheless, the amendment was defeated by 277 votes to 130. Labour and Lib-Dem MPs responded to their whips, and toed the party line. Strictly though, the Tory vote was not a rebellion or a mutiny, as there had been a free vote. The good news is that at least this blog is back doing the very thing is was set up to do when we set it up on 22 April 2004. That makes us now just over nine years old. By the time we get a referendum in 2017, if we do, the blog will be thirteen years old, longer than a typical life sentence for murder. The bad news is that it could be another five years after than before we see a referendum – depending on a lot of things, including the outcome of the general election, so the blog could be 20 by the time we see the results come in. With that thought, we take comfort in the view of the Independent which thinks that David Cameron's "bloody nose" tonight brought an EU referendum a step closer. Please let it be so.COMMENT: COMBINED REFERENDUM THREAD
Posted by Richard at 19:22