EU referendum: a failure to deliver 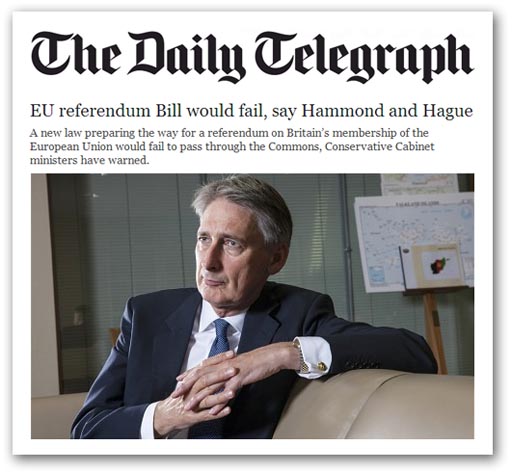 For all the rhetoric emanating from the Conservative Party, and the machinations of the back benchers, Philip Hammond and William Hague both bring their colleagues down to earth with a bump, telling them that the parliamentary party does not have enough votes in the Commons to force through a Bill on an EU referendum.Mr Hammond said it was "the simple reality" that a Bill would be impossible to get through parliament in the face of opposition from Labour and the Liberal Democrats, a comment endorsed by Hague, who declares: "All Conservative MPs have to bear in mind that key point I'm making: we don't have a majority in the House of Commons".As to whether the Lib-Dems would help the Conservatives out, Simon Hughes, the Lib-Dem deputy leader, is clearly ruling that out. It would be "madness", he says, to hold an EU referendum before the next general election in 2015. People's concerns, he says, are the economy, declaring, "I think it would be madness to have a referendum and spend all our time thinking about whether we should be in or out of Europe when the priority is to sort out the economy".This is not going to put the chatter about a referendum to bed, but the reality is that we are not going to see an EU referendum this side of the general election.  That, of course, leaves the Farage Party to turn the euro-elections into a pretend referendum on continued membership of the EU, and proclaim a moral victory when it comes in with the most number of seats. Moral victories, though, don't butter the parsnips, as they say. Nevertheless, if Farage has his way (and he usually does), his victory line-up will include Tory re-tread Neil Hamilton, imposed over the heads of grassroot members, who complain about being "totally ignored" over selection choices.  Then, that always was the case, with The Great Leader rigging the lists whenever he could get away with it. All of this will get us no closer to actually holding an EU referendum, much less an in-out referendum, and it remains the case that, if the Tories actually get into office again at the general – with or without the Lib-Dems – it will be in spite of the Farage Party. Even though it may draw some support from erstwhile Labour voters, the bulk of UKIP's support (apart from ex-BNP) will come from former Tory voters. If Labour, with the assistance of UKIP, gets into office, the likelihood is that we will not get an in-out referendum, which is perhaps just as well. We are not in a position to win one.  Thus, it is a choice of "vote UKIP" and don't get a referendum, or "vote Tory" and possibly get a referendum, even if it is one we can't win, or one which is irrelevant anyway.


All the time the timetable is slipping and, having given the electoral route the best part of twenty years to deliver, without a result, not a few are beginning to take the view that more direct action is needed. Certainly, those who have expectation of the Golden Boy becoming prime minister, or his forging an electoral pact with a resurgent Tory Party, and leading us to the sunlit uplands, are in for an even longer wait.

Thus, as we stir the turgid electoral swamp, a great deal of gas is released, but nothing actually gets us anywhere near our objective. Right across the board, there is a failure to deliver, leaving many to wonder quite what it is we have to do to get us out of the EU.