Media: you read what you are allowed to read 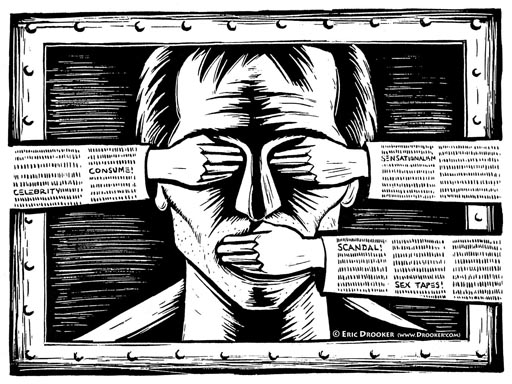 One of our number remarked recently on the absence of any mention of Article 50 from the broad sweep of the legacy media. A quick search proved that to be the case.
Autonomous Mind coincidentally notes the role of Article 50 as an antidote to FUD, the latter from the Goldman Sachs stable. Its report author was careful to avoid any reference to the potential of the Article to enable an equitable settlement to be negotiated, in circumstances which must be deliberate. One wonders, though, whether the general absence of comment in the media represents active censorship, which is turn invites dark thoughts of conspiracy between media bosses. Before these thoughts are dismissed outright, the emergence of yesterday's piece from Booker provides more than adequate testimony that pieces which contradict the editorial line do get spiked. Active censorship is a fact of life in the media, and everything you read is filtered through the system of editorial approval. So it was in the early days of UKIP in the European Parliament, where we found that stories submitted by journalists which mentioned UKIP were edited, and any reference to the party was removed. As a result, self-censorship took over. Not uncommonly, journalists would remove quotes attributed to Farage or one other of our MEPs, and similar quotes substituted, bearing the names of Tory MEPs. Daniel Hannan, himself a Tory MEP and then a leader writer for the Telegraph Media Group Ltd, was particularly prone to this, something for which I have never really forgiven him. This does remind us though that the current wave of publicity afforded to Farage and his party is neither accidental nor spontaneous. He gets publicity at the pleasure of the media barons - because they permit it. The moment that permission is withdrawn, Farage will disappear into the obscurity from which he emerged. That further raises the question as to why Farage is getting such a volume of (largely) favourable publicity, especially as the corporate businesses that run the major newspapers do not share his values or objectives. With the possible exception of the Express none want to withdraw from the EU. Given the opportunity, all will support any renegotiation concluded by Mr Cameron or his successor, no matter how weak it might be. An obvious conclusion to draw from this is that Farage, and thereby his members, are being used. Senior Tory members are convinced that he is a convenient stick with which to beat Mr Cameron, who has – for several and different reasons – fallen out of favour with the media barons and their corporate interests. Should Cameron at some time rebuild his bridges, or a more acceptable replacement be put in place, Farage will be ditched, leaving UKIP members in the wilderness. At the moment, journalists are being allowed to play, but the moment business gets serious – round about general election time – the teachers will rap the table, and the children will be brought back into line. That gives the clue to the treatment of Article 50. On the face of it, invoking the Article, seeking EFTA/EEA membership, and repatriating the acquis offers a sensible, temperate solution to withdrawing from the EU. It minimises any collateral damage and allows trade to continue uninterrupted, without loss. And that, of course, is the last thing that the corporates - which include the media interests -actually want. They do not want a solution to the problem, otherwise people might agitate for it, and we could end up actually confronting a successful withdrawal. Thus, they will publicise Farage, under license, but not Article 50. Through this dynamic we get the surreal situation where the self-appointed "expert" from Open Europe manages to write a long piece about leaving the EU, without mentioning Article 50 once. It is raised only in the comments by a reader.The point to emerge from all this is the reminder that we are very far from enjoying a free press in this country. Anything of political significance that you are able to read in the print media is there only because someone decided you should be allowed to read it. There may be exceptions, but these only go to prove the rule. A few licensed dissidents – such as Booker - are allowed. They are treated with benign amusement, and kept on because they have high page traffic. But they are kept firmly in the "ghetto" and not allowed to play with the rest of the girls and boys. Sadly, though, people – the dwindling band that continue to read newspapers and believe what they say – actually believe that they are well-informed after they have expended so much of their life-energy reading the tat they are permitted to see. But they should never forget that most censorship comes not from governments but from the media itself. They have the power to dictate the agendas and they are not at all reticent in using that power. You read only what you are allowed to read. COMMENT THREAD
Posted by Richard at 19:53