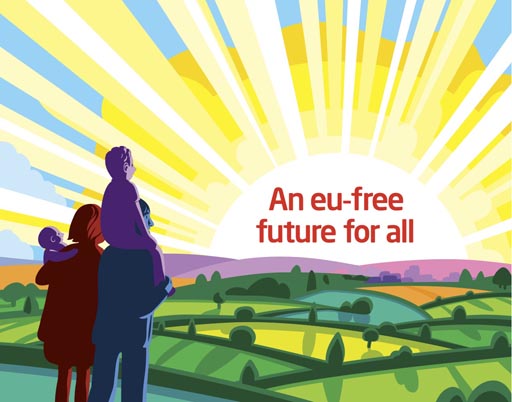 Booker and I have often referred to the establishment of the European Union as a slow-motion coup d'état, a revolution by any other name. And if it is really the case that the EU is the fruit of a revolution, that makes eurosceptics – almost by definition – counter-revolutionaries.It is perhaps better, though, to look forward. Rather than simply seek to undo the damage that has been done, our energies would be better directed at plotting a revolution of our own, seeking a better, more equitable society in which democracy has a chance of thriving. But, if it is revolutionaries we are, then we must behave like them. And that means we must have a plan – a strategic plan. No revolution has ever succeeded without one. And, like the Harrogate Agenda, my suggested plan has six points, which I conveyed to the CIB on Saturday. These are: 1. A credible exit plan

2. Reassurance for business
3. An alternative to the EU
4. A network for dissemination
5. Agitation
6. A coalition of allies

The absence of a credible exit plan, agreed by the bulk of the eurosceptic movement, is a major weakness. If we cannot agree on how to extricate ourselves from the EU, how can we expect the electorate to have the confidence to support withdrawal?

However, the emphasis must be on credibility. And such a scheme, we would argue, is to invoke Article 50 of the Lisbon Treaty, leading to a negotiated exit based on UK membership of the EFTA/EEA as an interim settlement. To ensure short-term continuity, we would have all EU law repatriated, giving time for examination and selective repeal, and the enactment of replacement legislation as necessary – all over a period of some years.

In any exit negotiations, we would also go for a "sunset clause" on any agreement, with an option to renegotiate terms at, say, five-year intervals – one aim being to strengthen the role of EFTA.

Although the EU has been characterised as an economic union, it is a political construct with the objective of political integration – the final state being the United States of Europe. It is the means by which we are governed.

Continued membership or withdrawal, therefore, is not a matter for business. It has no right to determine, and nor should it have any say in how we as a people are governed. We should not accept any role for business in a referendum campaign.

However, business has a right to expect a predictable and stable regulatory and trading environment, the status of which is affected by our membership. Therefore, we need to be able to assure the business community that, should we leave the EU, there would be no adverse effects.

In effect, that would mean "protecting" membership of the Single Market – which could be achieved through EEA membership. And, as long as that membership is assured, business has no locus in the broader debate.

3. An alternative to the EU

Withdrawal from the EU, simply to hand back power to the Whitehall/Westminster matrix is not an attractive option. But, as much to the point, the EU is a symptom of a greater malaise. Leaving the EU, therefore, may not solve our more deep-seated problems.

If one adds to this the general principle enunciated by Richard Stokes MP in October 1940, that it "is no use fighting for a negative object". To attract the broadest constituency, we need to mount a positive campaign, offering an alternative, more attractive vision of society.

This is where we believe that The Harrogate Agenda could have a role. This has the added advantage, from a campaigning point of view, of being incompatible with our membership of the EU.

4. A network for dissemination

Spreading the message is an essential part of any campaign, but reliance on the media is not going to be sufficient. Formal and informal networks will have to be built, some not dissimilar to direct marketing networks. Activities should include formal training and education, as well as more general propagandising.

Many revolutionary organisations have acquired their own newspapers, or news magazines, as a means of better spreading the message.

Major changes in political systems are rarely achieved without a degree of what might be loosely called "agitation" – action against government through mechanisms outside the normal electoral process. In fact, working within the existing political system is rarely effective as political parties generally serve to create and reinforce the status quo.

Non-violent activities might range from street demonstrations of varying size to non-cooperation, passive resistance, and active civil disobedience. The essence it to reflect the withdrawal of consent to being governed under the current system, which has little effect unless it is communicated in very visible ways.

The problem which revolutionary groups confront, especially in England, it that we have generally a conformist and obedient society, and one which is often slow to complain, even when there is good cause to do so.

Conformity, of course, is learned behaviour, conveyed by parents and schools, and through employers, plus official actions and sanctions. By the same measure, non-conformity and outright disobedience has to be taught, with guidance and active instruction given.

Activities can range from the most simple, such as the late-payment of official imposts – such as Council Tax, water bills, BBC license fees and other such fees. Even a low-grade nuisance campaign can have an effect, such as refusing direct debit payments, and sending cheques instead (without official reference numbers). Instead of being sent to payment offices, these can be addressed personally to the private offices of chief executives, stressing their administrative systems.

A suggestion which reached me was a small sabotage campaign called "English spoken here". If we are required to provide immigrants with information about how to claim benefits, etc., let it be in English. We visit every agency, every employment office, etc. and remove all information (leaflets, brochures) not in English. Such small actions are the way to go. A lot of littles make a lot.

A very wide range of activities is in fact possible, many entirely risk-free and totally within the law. All tend to rely on numbers for their effect, but the range is limited only by the imagination of campaigners, and the extent of any networks, which are needed to spread ideas, techniques and experiences.

6. A coalition of allies

When it comes to confronting governments, we have the inherent advantage of numbers – there are always more of "us" that there are of "them". However, that advantage is only manifest if people are prepared to work together, and offer mutual support.

For that purpose, we get perennial cries for "umbrella" and "co-ordinating" groups, none of which ever come to anything. Not least, to maintain a fragile unity, compromises have to be made on strategy and objectives, which weaken strength and resolve.

Thus, the only real possibility of magnifying the effect of the disparate organisations is to form loose coalitions, willing to share information, occasionally co-ordinate action and to work towards the development of common strategies on certain issues. This will become essential in the event of a referendum campaign, where bids will have to be made for the official "no" campaign funding.

This outline does not pretend to be comprehensive, or in any way represent a definitive statement. It aims to make the points that a plan is needed, and then offers some elements which might be included in such a plan.

I was grateful to the CIB for inviting me to their meeting, to Edward Spalton for chairing the meeting (pictured in the previous post) and to the members for giving me a friendly and attentive hearing. The vibrant questioning was also very welcome.

Whether you agree or disagree with the detail, I would nevertheless aver that we will achieve nothing, and have achieved nothing, without strategic planning, aimed at achieving defined objectives. In my view, we either reconcile ourselves to that or we fail.

To me, that certainly is not an attractive option, and one which I intend to avoid.