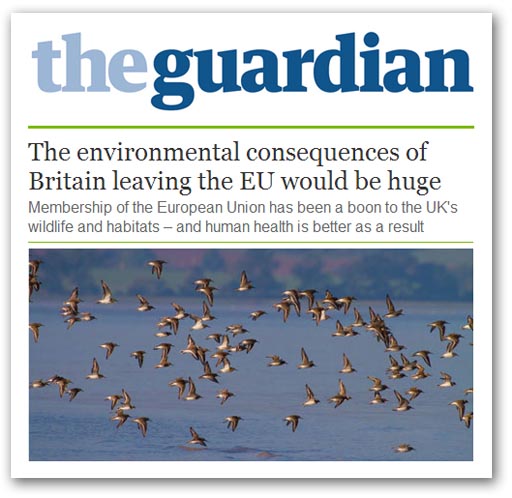 Whether we even have a referendum, much less when, isn't even settled. Yet, with the help of the loss-making Guardian, the EU-funded Friends of the Earth is already moving in to defend its generous sponsor's interests.


This is just a taste of then things to come, should a real referendum campaign get underway. What we are being told is that the environmental consequences of Britain leaving the EU would be "huge". Membership of the European Union has been a boon to the UK's wildlife and habitats, and human health is better as a result - we are told.

Thus, according to the less than impartial analysis for Friends of the Earth, published today by the EU policy expert Dr Charlotte Burns from the University of York, a go-it-alone Britain would be far from green and pleasant. The UK really was once the dirty man of Europe and only the EU has saved us from a polluted fate worse than, er … a polluted fate.

Now, there is no way we're going to be able to mix it with the Greens on their turf, and hope to win. Never get into a fight with a chimney sweep. The trick thus is not to accept the argument on their terms. We have to change the terms the debate.

Here, we already have input for the Secretary of State for the Environment, Owen Paterson. A "pragmatic" eurosceptic, he agues that we could not possibly abolish all EU law on leaving the European Union. We cannot have a situation where vital issues, such as environmental control, become totally unregulated. Even EU law, pro temp is better than no law.

On that basis, when we leave the EU, we take with us the whole acquis - the whole rag-bag of EU law. We repatriate it, and take it onto our statute book as our own.

Actually, much of it already is our own. EU law has already been integrated into the British statute book, by Acts of Parliament and through Statutory Instruments approved by Parliament. These do not disappear just because we repeal the European Communities Act. They stay in force until they are specifically repealed.

It is only EU Regulations that fall when we walk away from the EU, and it there that we have to legislate to repatriate the law. We bring it home, so that it becomes ours, to be implemented without a break.

On this basis, the Friends of the Earth is wrong. There would be no environmental consequences from Britain leaving the EU. The day after we leave the EU will be exactly the same as the day before we leave.

Some have interpreted this, in almost a malicious sense, as the UK remaining locked into the EU. But these people are not thinking straight, if at all. Almost all current environmental law is of EU origin. Thus, the prohibition, say, on dumping toxic waste in a school playground is, ostensibly, a breach of EU law. This we do not want to remove.

Looking at this in the round, not all EU law is bad law. Some, in fact, was originally sponsored by the UK. Some we would have implemented whether or not we were in the EU. But some is bad law, and we need to be rid of it.

So, what we do is appoint a Royal Commission and/or a review committee to look through the entire raft of legislation. After due consideration and much public debate, we keep what is good. We get rid of the unnecessary onerous and the bad. And we fill any gaps, and improve on what we've got – but we take our time, working carefully and deliberately.

Even then, we will not be on our own. Some is Single Market legislation and, if we remain in the EEA, we keep it anyway. We remain members of UNEP, of UNECE and of a myriad of lesser-known environmental organisations. So we stay fully engaged with the international community. And we honour international commitments.