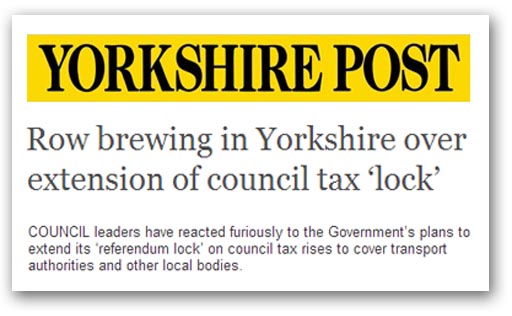 On the same day that the Daily Mail is telling us that 636 council officials who now earn more than the Prime Minister and some 2,525 council staff earned more than £100,000 in 2011-12, theYorkshire Post is reporting on a row brewing over government plans to extend its "referendum lock" on council tax rises to cover transport authorities and other local bodies.The contrast is more than a little interesting. On the one hand we have yet more examples ofwholesale looting by local government – with my local authority alone sharing £1.3 million between the top nine officials – part of a bill exceeding £3 billion for these over-paid town hall bureaucrats. On the other, we have an attempt by central government to allow the public to limit the power of councils to pick their pockets – only for "council leaders" to "react furiously" to the plans. At the heart of the "row" is the Local Audit and Accountability Bill, which aims to stop local authorities bypassing the requirement to call referendums if they plan to increase Council Tax by two percent or more. What they have been doing is top-loading the precepts, increasing those rather than the core tax, which means that the total sum can increase by more than two percent without the need to call a referendum. Showing absolutely no remorse on behalf of his members, Sir Merrick Cockell, chairman of the Local Government Association, simply complains that it was "inconsistent" for the government to subject council tax rises to a local referendum, when nationally-set taxes such as VAT are not. These, he said, "have a much greater impact on people's income than council tax, and the public was not directly consulted over those".


If Cockell has a point, however, there is an obvious answer to his assertion that it is "unfair" for the government to apply different rules for council tax hikes than it does for national taxes. To ensure parity, rather than remove the requirement for a referendum on council tax charges, we should be having a referendum whenever the chancellor intends to increase national taxes.

One might have thought that Cockell would offer that as an alternative – as an effective way to embarrass communities secretary Eric Pickles. But the fact is that Cockell and his merry men are not in the least bit interested in promoting democracy, so that idea would not have occurred to him.

Referendums to approve taxation (and overall budgets) at national and local level are at the heart of the Harrogate Agenda. But we can see from the local authority reaction to just a minor concession to direct democracy what an uphill struggle we will have in getting annual referendums on budgets as a whole.

It has to be said though that Mr Pickles has at least lodged the principle that demands for tax funds can be subject to referendums, making our job that much easier. And, with local authority officials filling their boots at our expense, never more has it been so necessary that we should have the power to restrain them.

In the meantime, these raids on our pockets lack any democratic legitimacy, and it is the reign of brute force rather then consent which determines willingness to pay.

But, short of outright refusal to pay local taxes, it becomes something of a civic duty to make collection as difficult and as slow as possible for local authorities. Speedy payment and absence of complaint is taken as popular consent, and it should be made clear that this no longer applies.