Booker: we can't have our cake and eat it in the EU 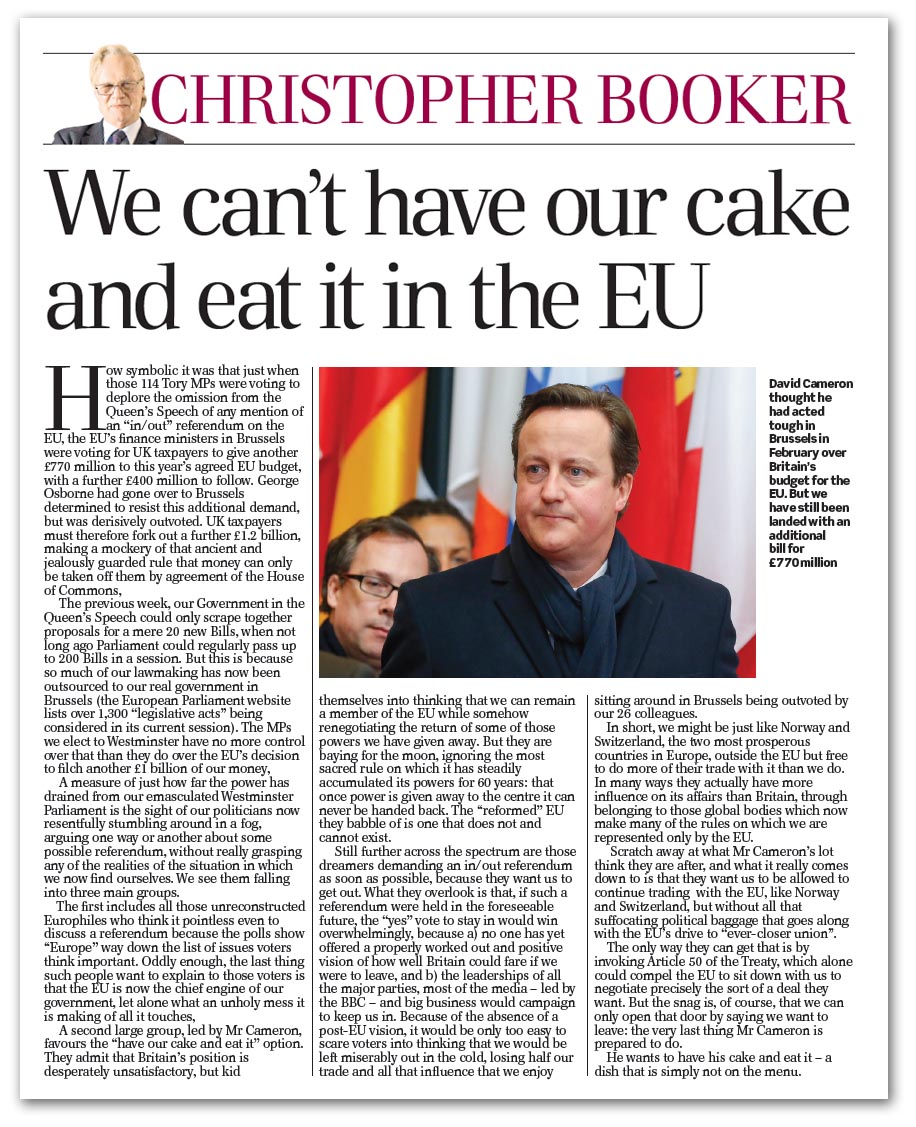 How symbolic it was, writes Booker, that just when those 114 Tory MPs were voting to deplore the omission from the Queen’s Speech of any mention of an in/out referendum on the EU, the EU's finance ministers in Brussels were voting for UK taxpayers to give another £770 million to this year's agreed EU budget, with a further £400 million to follow.George Osborne had gone over to Brussels determined to resist this additional demand, but was derisively outvoted. UK taxpayers must therefore fork out a further £1.2 billion, making a mockery of that ancient and jealously guarded rule that money can only be taken off them by agreement of the House of Commons. The previous week, our Government, in the Queen's Speech, could only scrape together proposals for a mere twenty new Bills, when not long ago Parliament could regularly pass up to 200 Bills in a session. But this is because so much of our lawmaking has now been outsourced to our real government in Brussels (the European Parliament website lists over 1,300 "legislative acts" being considered in its current session). The MPs we elect to Westminster have no more control over that than they do over the EU's decision to filch another £1 billion of our money. A measure of just how far the power has drained from our emasculated Westminster Parliament is the sight of our politicians now resentfully stumbling around in a fog, arguing one way or another about some possible referendum, without really grasping any of the realities of the situation in which we now find ourselves. We see them falling into three main groups. The first includes all those unreconstructed Europhiles who think it pointless even to discuss a referendum because the polls show "Europe" way down the list of issues voters think important. Oddly enough, the last thing such people want to explain to those voters is that the EU is now the chief engine of our government, let alone what an unholy mess it is making of all it touches. A second large group, led by Mr Cameron, favours the "have our cake and eat it" option. They admit that Britain's position is desperately unsatisfactory, but kid themselves into thinking that we can remain a member of the EU while somehow renegotiating the return of some of those powers we have given away. But they are baying for the moon, ignoring the most sacred rule on which it has steadily accumulated its powers for 60 years: that once power is given away to the centre, it can never be handed back. The "reformed" EU they babble of is one that does not and cannot exist. Still further across the spectrum are those dreamers demanding an in/out referendum as soon as possible, because they want us to get out. What they overlook is that, if such a referendum were held in the foreseeable future, the "yes" vote to stay in would win overwhelmingly, because a) no one has yet offered a properly worked out and positive vision of how well Britain could fare if we were to leave, and b) the leaderships of all the major parties, most of the media – led by the BBC – and big business would campaign to keep us in. Because of the absence of a positive alternative, it would be only too easy to scare voters into thinking that we would be left miserably out in the cold, losing half our trade and all that influence that we enjoy sitting around in Brussels being outvoted by our 26 colleagues. In short, we might be just like Norway and Switzerland, the two most prosperous countries in Europe, outside the EU but free to do more of their trade with it than we do. In many ways they actually have more influence on its affairs than Britain, through belonging to those global bodies that now make many of the rules on which we are represented only by the EU. Scratch away at what Mr Cameron's lot think they are after, and what it really comes down to is that they want us to be allowed to continue trading with the EU, like Norway and Switzerland, but without all that suffocating political baggage that goes along with the EU's drive to "ever-closer union".

The only way they can get that is by invoking Article 50 of the Treaty of Lisbon, which alone could compel the EU to sit down with us to negotiate precisely the sort of a deal they want. But the snag is, of course, that we can only open that door by saying we want to leave: the very last thing Mr Cameron is prepared to do.

He wants to have his cake and eat it, Booker concludes – a dish that is simply not on the menu.