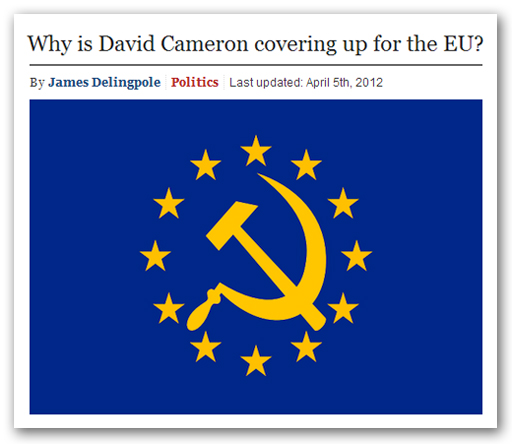 Dellers is in fine form with a piece asking why Cameron is so keen on covering up for the EU, when compliance with EU diktats cause him so much political grief. In raising the issue, EURef is quoted in relation to the "Big Brother plans to spy on all internet visits, emails and texts". Booker also gets a look in, with his comments about the EU and the "pasty tax".

These are two issues where the EU involvement has been kept out of the limelight, and James offers the suggestion posited by Sue Cameron that the craven behaviour of the politicians simply reflects the fact that civil servants rather than our "elected parliamentary representatives" who really call the shots.

That question, as to who is actually in charge, is a good one, and there is undoubtedly some merit in arguing that the civil servants are behind much of the pressure to conform with EU laws and requirements. But Dellers goes a little further than Sue Cameron, and argues that the situation is worse than she paints. Those Whitehall bureaucrats, he says, are merely enforcing the will of EU technocrats.

In many respect, that is certainly the case.  But the issue is deeper than that. Our officials will undoubtedly argue that they are merely pointing out to ministers their "international obligations". The UK, they will aver, believes in the rule of law, and the EU acquis is part of our body of law. Parliament has decided that that is the case, and therefore, ministers are obliged to conform with the will of parliament.

Much of the problem - and dishonesty - therefore, rests with parliament. We hear from diverse caucuses within that body, complaints about the EU, but rarely do you hear MPs state with any clarity that the reason why the UK remains a member of the European Union is because parliament permits it.

Should they so decide, ministers could turn the tables on parliament. Whenever they were obliged to enact an EU requirement, they could simply state the truth. They obey EU law because parliament requires of them that they should do so, and under our constitution, ministers are bound by the will of parliament.

It takes little imagination, however, to work out the long-term effect of such candour. Putting the MPs on the spot would undoubtedly focus the electorate on the true culprits for our predicament and, before very long, one could see individuals reacting to that pressure, the cumulative effect of which could end up in parliament voting to withdraw.

This might thus suggest more subtle and important reasons for ministers’ silence on EU involvement, some of which were rehearsed in a piece we wrote last December. This concluded that, for a variety of reasons, ministers support our continued membership of the EU, which in turn suggests that they are not going to do anything which might prejudice our membership.

Nothing in such a complex issue, however, is straightforward, so there will always be multiple reasons for the silence, which will change over time, and with the specific circumstances. In the Dellers piece, two commenters offer their ideas, which are extremely plausible.

Says one, once you admit you are powerless you become pointless. To admit that you have conceded sovereignty over an area of tax and spend is political suicide, far greater than the unpopularity of the specific issue. Another refers to the line in the film The Sum of All Fears, where the fictional Russians president Nemerov, discussing a massive chemical weapon attack on Chechnya which was executed without his orders, tells his advisor: "Better to appear guilty than impotent".

That, most probably, was the case with the "pasty tax", but there is probably a different dynamic at play with the "Big Brother" spying plans. Here, we have something which is actually initiated by the UK government, inspired by the EU rather then a specific requirement.

Something of this nature that is inherently unpopular, however, would be even more unpopular if the EU link was acknowledged. This means that ministers, including Cameron, are best keeping quiet.

The bottom line in most cases, though, is that there is massive support for continued membership of the EU within the political classes (and the media). If there was political will, the politicians could over-ride the civil servants and have us out of the EU tomorrow. But they don't want to, so it won't happen. And it is that which Cameron – and all the rest – are really covering up.