"There was no warning call and the risk of someone being injured was big, as the building is centrally located," a police official is cited as saying. The attack was the second in under a week. A similar bomb exploded at the office of former Prime Minister Costas Simitis last Tuesday. 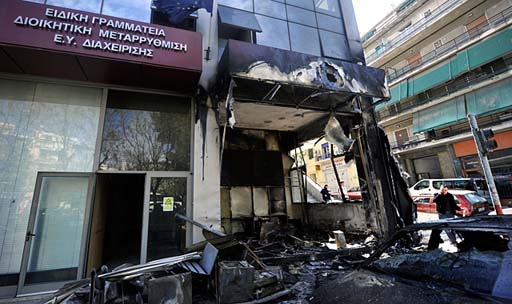 The pictures in the Mail and elsewhere, however, indicate a far more serious explosion than the news agency report suggests, with the corner of the building ripped out and gutted.

Sky News is also at odds with the Reuters report, talking of a "powerful bomb", which indeed it must have been to have caused so much damage.

In a country where violence is fast becoming the norm, over the weekend mobs of militant protesters stormed a tiny television studio in northern Greece, pelting the news host with eggs and yoghurt for "airing the views of far-right politicians".

This, says Sky, signified something different and more telling. It then cites Yiorgos Karatzaferis, the leader of a small far-right party, who says, "People are mad. And perhaps justifiably so after so many years of austerity".

Despite that, not too much can be read into incidents, although the bomb could be the start of a growing trend. Greece is no stranger to civil war, and the people have been provoked enough for it to be on the cards. And when politicians stop listening, there are few other options left.