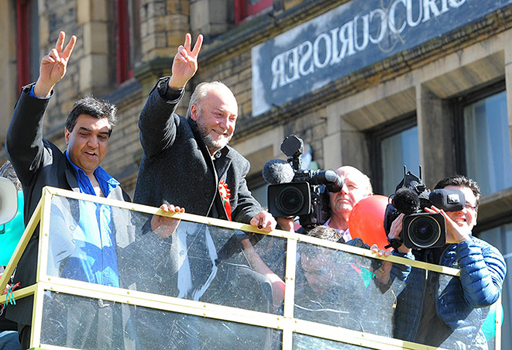 I had a long talk yesterday afternoon with someone who had been at the West Bradford count, where the Galloway victory was declared. He confirmed the point that the result had come as a complete shock to the established parties, although Galloway had been parading round the counting centre very early, claiming a victory.
Nor even did the media pick it up, neither national nor local. In fact, even at the count, local BBC reporter Nick Morris was saying that the turnout had been very low, "possibly low thirties", when in fact it was 50 percent – higher than normal for a by-election.Sky News's Jon Craig predicted: "Labour win, George Galloway 2nd, Tories pushed into 3rd place after fuel blunders". And, of course, the local paper, the Telegraph and Argus, had gone to sleep.Of equal interest though, my man on the spot confirmed that which I asserted at the time, that this was a "two-finger" vote. And although directed primarily against Labour, it must not be forgotten that the Conservative vote also collapsed, with candidate, Jackie Whiteley coming in at 2,746 votes, compared with the Tory vote of 12,638 in the general.Now, with recent events, everyone's an expert, and the know-nothing media have suddenly picked up the startling idea, to them, that the public is seriously out of sorts with the political classes, even if it is something we've been banging on about it on this blog for years.And so do we get the state where the famous James Forsyth does a Rip Van-Winkle awakening and looks round to observe that: "the big question in British politics right now is what happens when the voters are dissatisfied with all the three main parties and their leaders".

This, of course, is from a hack who has been bigging up Cameron from the very start, the man who in July 2009 was confidently predicting that the Tories were "on course for a comfortable election win" (above). Now, like so many of his tribe, he is suddenly discovering that his hero has feet of clay.

And, although our James struggles to see any serious break in the three party mould at the next general election, he too is in the market for statement of the bleedin' obvious. "It is hard to imagine that the electorate's dissatisfaction with all three parties can go on much longer without something giving", he says.

Melanie Phillips is also in the market. But she goes for a touch of political soothsaying, only she lays greater store by Don Porter than we do, with whom we were less than impressed. She, though, is closer to the ground than the Famous Forsyth, slamming Cameron, and remarking that the general public is "able to detect shallowness and falsity in its political leaders at a thousand paces".

I don't know when Melanie first turned against The Boy (I read her blog about as often as she reads mine), but to give her her due, she has been opposed to him for some time, in 2010 calling him "cynical" and dangerous to the British national interest.

Now Cameron seems to be falling out of fashion, maybe more of our corps of gifted hacks will join in the chorus of condemnation. And when, with the same degree of perspicacity that they addressed the West Bradford by-election, they tell us what is going to happen, we can fall to our knees and revere them for their sagacity.

In the interim, though, we might just have to accept that they know very little about what is happening on the ground, and not a great deal about much else.

But hollow men, like horses hot at hand, Make gallant show and promise of their mettle; But when they should endure the bloody spur, They fall their crests, and, like deceitful jades, Sink in the trial.

She was referring to the "Cameroon modernisers" but she could just as well have been talking about her know-nothing media colleagues and their "gallant show".