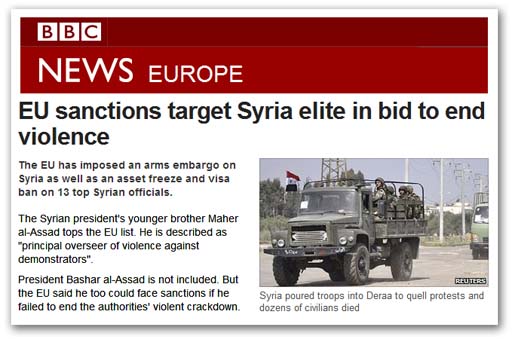 "So much for the ceasefire", headlines the Daily Mail as Syrian tanks keep shelling Homs after UN deadline has passed.

Over 1,000 people have died in eight days; shells have been fired in defiance of passing deadline to pull troops and heavy weapons out of towns; Britain's Foreign Secretary William Hague has accused Syria of breaking international law; funerals have been held for three killed inside refugee camp in Turkey as well as Lebanese cameraman shot dead across border; there are fears that Turkish troops may enter conflict after Turkey's PM warns they are planning 'steps' and accuses regime of shooting children 'in the back'; and Syria hits back by accusing Turkey of arming and helping rebel fighters.

What then of the fabled European Union with its common foreign policy, and its fabled Common Security and Defence Policy (CSDP), the like of which was supposed to impose peace and harmony on all men?

Well, as with the lack of unity in Afghanistan, with the French talking of a unilateral withdrawal, the EU is demonstrating in Syria nothing other than its own impotence.

You would have thought, in fact, that the EU would be taking quite a robust line with this country, with French interests stretching back to the League of Nations mandate of 1923.

But this is not at all evident from the response after widespread protests erupted in this country in March 2011. As President Assad moved in troops to quash the nascent rebellion, the violence spread. And the EU did?

Well, the only thing it managed was an arms embargo on Syria, an asset freeze and visa ban on 13 top Syrian officials (pictured top).

Well, no less than the president of the EU parliament, Martin Schulz, asserted that there was "no other solution than a political solution to the situation", with the European Parliament offering its "unconditional support" to the United Nations Arab League special envoy Kofi Annan.

And then, terror of all terrors to the dictators of this world, we had the 3157th Foreign Affairs Council meeting in Brussels on 22-23 March 2012.

However, all the Council managed to do was tell the world that the "European Union was increasingly appalled" by the unfolding situation in Syria. It strongly condemned "the continued brutal attacks and systematic human rights violations by the Syrian regime" and called for President Assad to "step aside to allow for a peaceful and democratic transition".

Yet it was Syrian Army tanks which were roaming the streets of Homs (pictured), slaughtering people and devastating the town.  Despite the Turks possibly considering putting their own troops in, there is not a single EU badge to be seen.

So much then for the CSDP. The next time Assad hears a "robust" statement from either the EU parliament or the Council, in the manner of Stalin he might well ask how many divisions they have.