Losing the knack of government 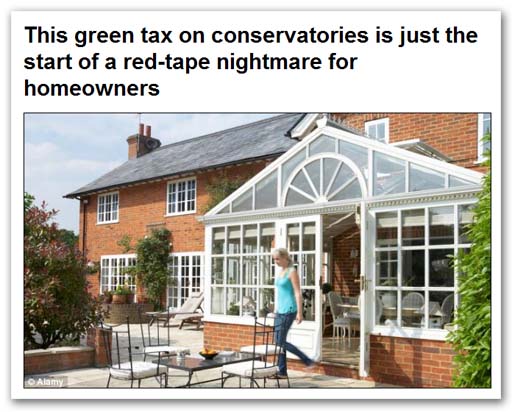 Millions of householders who want to build a conservatory, replace a broken boiler or install new windows will be forced to spend hundreds of pounds more on "green" projects, the paper said. It then tells us that they will not be permitted to carry out the home improvement or repair unless they agree to fork out for measures such as loft or wall insulation.

Autonomous Mind commented on the plans, linking to a piece on the Sky website, also bringing in the EU dimension, as did Witterings from Witney, giving us further background. The story is then picked up by John Page, who also refers us to a comment piece by Booker in the Daily Mail this morning.

This then, is all about our administration's obsession with climate change and the so-called "Green Deal", but there is another aspect here which has yet to be fully absorbed. It is part of the bigger picture relating to the management of our energy supplies.

The disgraced Huhne and now his successor whatsisname are bundling energy supply issues with consumption management, seeking to reduce significantly the amount of energy used.

In this case, the emphasis is on insulation standards and, in principle, the idea is not a bad one. Poor insulation in British homes is responsible for a colossal waste of energy and it makes sense to try to reduce that.

Nor is it necessarily a bad idea for government to be involved. Anyone who remembers the Clean Air Acts, and the mass conversion of domestic open fires to reduce air pollution, will know that properly planned government action, with popular support, can deliver a significant public good.

But, as Booker illustrates, what we have here is an unwieldy bureaucratic machine, seeking to attain an objective in a cumbersome, expensive and intrusive way, all in the context of a general lack of public support and engagement.

It therefore comes over as a top-down imposition, rather than a co-operative exercise, aimed at achieving a reasonable and desirable end.

And that encapsulates the problem with modern government. They have lost the knack of governing effectively. A potentially useful measure has been so badly designed, with such inept PR, that it is costing far more than it should, putting the backs up of innumerable people, and making life more complicated and unpleasant.

The lesson the administration has forgotten (I don't call it a government any more – that is in Brussels) is that, in order to achieve something of the magnitude of this project, you must engage people, enthuse them and carry them with you.

It takes a special kind of genius to mess things up this badly and, as the opinion polls will attest, that seems to be the only thing the Cleggerons are any good at.