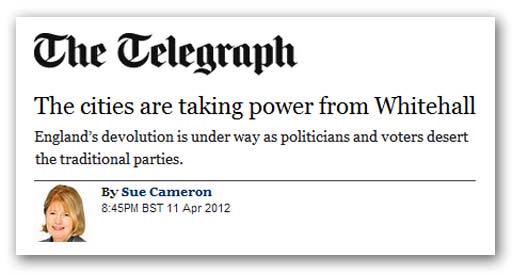 There is an exceptionally stupid piece by Sue Cameron in the Telegraph today, asserting that the cities are "taking power from Whitehall". This refers to the city mayors that the system is creating, but the egregious Sue has so badly misread the situation that her thesis is barely worth entertaining.

But then, when you see the quality of her sources, this is not surprising. She cites professor Tony Travers of the LSE who tells us that we are seeing in this new mayoral system "the building blocks of English devolution".

In fact, what we are seeing is another layer of professional politicians, their powers defined (and circumscribed) by parliament, with vanishingly small powers and next to no control over the councils over which they apparently preside.

However, the essential failure of this dim woman, in running with the "devolution" meme, is that she does not understand that any transfers of power that have taken place have occurred between sets of politicians.
As always, the people are out of the loop. We are simply being given the "opportunity" to pay more to spread a limited set of powers thinner. There is no way that having yet another highly-paid politician in the loop, each with their entourages paid from the public purse, confer any more (or any) power to the people.

Yet, the plague of parasites doth grow. On 3 May, our rulers have most graciously reached down and awarded us a referendum to decide on whether Bradford, amongst other cities, should have a mayor. This is explored by the local newspaper, recording that the only MP in the city in favour of the move is Galloway.

For myself, I will be voting against. Not only do I not want what Tory MP Philip Davies says is, " another layer of bureaucracy", I don't even want the existing layers. In fact, living in a sizeable urban village to the south of Bradford, I don't even want to be in Bradford MDC.

A local authority area of 500,000 inhabitants, larger than some countries in the EU, is not local government. And it is not democratic.  Getting a mayor to reside at the pinnacle of a crooked system is hardly going to make it better. It most certainly is not devolution in any meaningful sense.