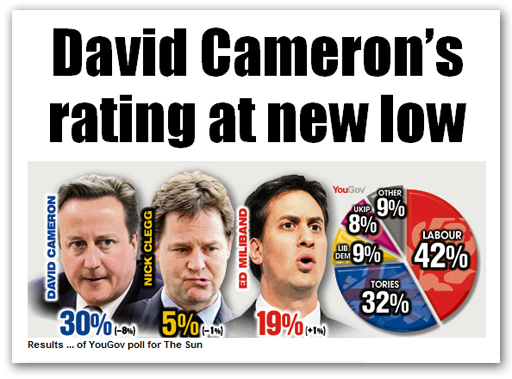 It don't mean nuffink, but it is great fun nevertheless to learn that public confidence in The Boy has hit an all-time low, according to a YouGov poll. Only 30 percent of respondents said he would "make the best PM" — the lowest figure since he entered No 10. His rating has dived eight points in a fortnight.

Predictably, Miliband has failed to take advantage, scoring only 19 percent, making one wonder that there can be that many people who would support this creature. But then Clegg only gets five percent, a figure which has the merit of being closer to zero.

Just as interesting though are the "don't knows", running to forty-six percent. Actually, some of those will be "don't cares" and others will be "none of the above". It is a pity that the poll does not categorise these separately.

On the bigger picture, Labour is on 42 percent, ten points ahead of the Tories at 32 percent, with the Lib-Dims trailing on nine percent, just one point ahead of UKIP.

"Others", including UKIP, account for 17 percent of the poll, more than the difference between the two leading parties. In a general election, that could have a significant effect on the overall result, as individual seats may well be lost as votes go into a minority party box instead of oscillating between the big two.