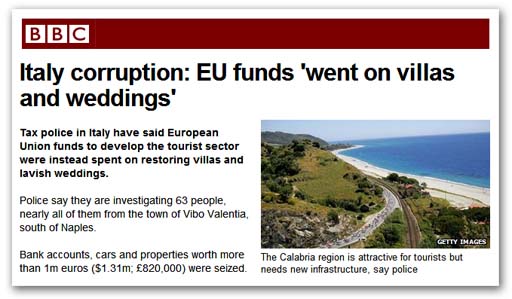 The BBC (and others) are reporting on yet another EU funding fraud, this one coming from the Italian tax police. They claim that money paid for the development of the tourist sector has instead been spent on restoring villas and lavish weddings.
Police say they are investigating 63 people, nearly all of them from the town of Vibo Valentia, south of Naples. Bank accounts, cars and properties worth more than €1m have been seized. Also under investigation are two officials from Calabria, a stronghold of the Ndrangheta crime group, who are in charge of distributing the EU money.Tax police said the money was used to extend and furnish private homes, and to give furniture and televisions to relatives or friends at weddings and other occasions. The investigation is focusing on crimes including aggravated fraud to obtain public funds, embezzlement of EU funds, and using false documents.Misuse of EU money, though, is so prevalent that this barely rates as a news story. Nothing significant will come of the reports. As one gang of crooks is picked up, another takes their place.Furthermore, it is not only the Italians who are at it. Cranmer, recently told us about the way the EU commission has sanctioned a €29 million pay-out to Greece's top political parties for campaigning in the May elections, and for unpaid wages and other debts, such as to the state social security fund.Here, the payments have a patina of legality, it that they have been authorised by an official body. But, as Cranmer remarks, the money has been supplied by diverse taxpayers, including us – and none of us had any idea that the money would be used to subsidise Greek politicians. Had we been given a choice, none of us would have agreed to it.That, though, doesn't matter. They are all having a party at our expense – the Party Med. Our money, their party, and we're not invited. That's the way things work now.COMMENT THREAD
Posted by Richard at 16:31