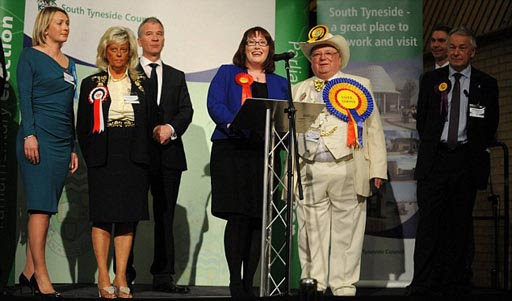 As expected, the South Shields parliamentary election gives the seat to Labour's Emma Lewell-Buck, with 12,493 votes. That represents 50.5 percent of those who cast a vote.

Understandably, the political classes and the media claque want to focus on the percentage of the vote. But the a turnout tells a different tale. The 24,736 votes cast from a 63,765-strong constituency (38.8 percent based on 2010 figures) give Lewell-Buck a pathetically small mandate of 19.6 percent – less than one in five of the electorate.

Thus does the "none of the above" party win again, although this does not stop the newly-elected MP from being "absolutely ecstatic". And, in a graphic illustration of the disconnect afflicting the political classes, she burbles that the result showed Labour was connecting with voters and the coalition government was taking the country in the "wrong direction".

Aside from the winner, much hype attends the performance of UKIP, with candidate Richard Elvin picking up 5,988 votes to come a poor second. He gained 24 percent of the votes cast, displacing the Conservatives, who took second place in the general.

Although this is a stellar performance for a party which did not field a candidate in the general election, the low turnout flatters all party performances. UKIP actually takes a 9.4 percent share of the electorate, compared with a 14.8 percent share at Eastleigh, and 7.3 percent of the available vote at Rotherham.

For the Conservatives, though, there was no relief. Candidate Karen Allen took 2,857 votes, compared with 7,886 polled by the party in the general. That put the Tories in a humiliating third place, behind UKIP, with a mere 4.5 percent of the electorate turning out to vote for them.

Ostensibly, this replicated the Eastleigh experience, where the Conservatives were also pushed into second place by UKIP. But there, the Tories lost 13.9 percent of their vote. In South Shields, they lost 10.1 percent of their general election vote. Marginally, this was a less worse performance, as is UKIP's performance not quite as good as it achieved in Eastleigh.

An independent Asian candidate, Ahmed Khan, came fourth, with 1,331 votes. This was 5.38 percent of the votes cast, which was enough for him to keep his deposit – a sign of the times perhaps.

At Eastleigh, there were ten other parties in the field, including the Monster Raving Loony Party, which collectively polled 2,056 votes. This time round, we only saw five contestants, outside the Lib-Lab-Con plus UKIP matrix. But, with the BNP (which did not stand at Eastleigh), they took a sizeable 3,046 votes, representing 12 percent of the votes cast. This fracturing of the vote is becoming a significant factor in electoral contests.

Within this, there was a collapse of the BNP vote, down from 2,382 in the general election, to a mere 711. This is the spectre at the feast. There is much talk about the source of the UKIP votes but – as with Rotherham where the BNP vote dropped from 3,906 at the general election to 1,804 in the 2012 by-election. As before – it looks as if Farage's party could be the beneficiary of the BNP collapse.

The other major story from South Shields was the misery of the Lib-Dems, the party crashing into seventh place to lose its deposit with a mere 352 votes, less than half the BNP level and not so very much more than the Loony party. This compared with third place in the general, when the candidate came third, polling 5,189 votes.

Not all is doom and gloom though. The New Statesman sees green shoots of a Lib-Dem recovery appearing. Hope springs eternal.