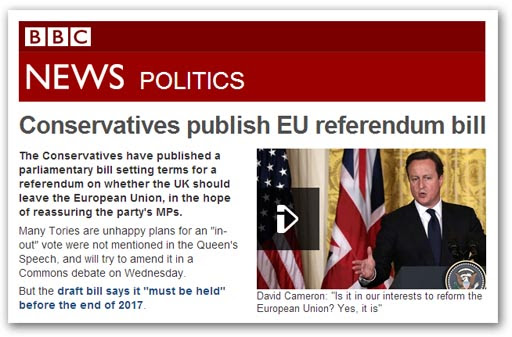 A due amount of cynicism is warranted, and all the things I said last night about the prime minister still stand.


However, it is possible to concede a small amount of surprise at the exact text of the referendum question that might be asked, if we ever get a referendum, which is now supposed to be before the end of 2017. And that question, the one which causes the surprise is, "Do you think that the United Kingdom should remain a member of the European Union?"

The reason for the surprise is that it abandons the great advantage, upon which Mr Cameron was to rely – the "renegotiation" ploy which, according to Kellner and others, converts a majority in favour of leaving into a comfortable win for him.

Cameron is still going to be pushing his renegotiation agenda but, unless that is tied in to the referendum question, he has problems. In the 1975 referendum, the question was very similar: "Do you think that the United Kingdom should stay in the European Community (The Common Market) ", but that time it was prefaced by: "The Government have announced the results of the renegotiation of the United Kingdom's terms of membership of the European Community" …

Also, tying the referendum to the end of 2017 at the latest opens the way to the "colleagues" to block any negotiations right up to the very last minute, leaving Mr Cameron with no room for manoeuvre in seeking to big-up the deal.

On the other hand, the one thing Cameron has going for him is that he is now able to say only his party is offering a "clear choice" about the UK's future in Europe. But most of all, he can say with a little more conviction that the only way we are going to get a referendum is by voting Conservative.

Whatever one might think of the way he has been dragged kicking and screaming to this position, it would be very hard now for a new Conservative government to back away from a referendum. Even without legislation in place before the election, they have nailed their colours to the mast.

Interestingly, Miliband is holding firm so far. He is not bending to vulgar "populism" and matching Cameron's offer. But we can bet he will be watching the polls very closely, and if there appears to be electoral advantage from putting a referendum on the table, the Labour leader will surely be tempted.

This also rather puts Farage on the rack. If we judge that Cameron is making a genuine offer, then our best hope for a generation for getting out of the EU is most definitely to back the Conservatives. A vote for UKIP at the general election would have the effect of denying us the opportunity of quitting.

These are difficult judgements though. To treat Mr Cameron's offer as suspect is entirely an honourable position. With so many promises made, and not fulfilled, there is every good reason for not believing that this is a genuine offer.

Thus, we ourselves have to make the call. Are we going to hammer the Tories, and hold out for something better – whatever that might be – or do we go with the latest offer and hope it comes off? And then, we have to ask whether we are actually capable of winning a referendum, or is Mr Cameron presenting us with a poison chalice.

Just for once, the ball is back in our court. We maybe have a chance of a referendum, but maybe it is an illusion. And then, do we really want something we might not win?  We are unprepared, with no coherent arguments to put to the electorate, and could very easily lose a referendum.

As yet, though, it is not decision time, but the choices are getting more interesting and challenging.