EU referendum: the "little Europeans" of the CBI 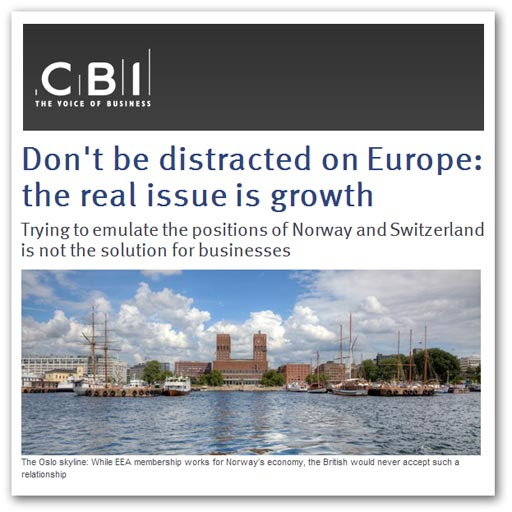 There is some merit in dismissing the Conservative manoeuvres on the EU referendum as "gesture politics", as there is a huge element of showmanship in the current proposals. But therein also lies danger. The referendum has been moved up the political agenda and the possibility of there now being a poll on or before 2017 cannot be ruled out.Certainly, the apparatchik currently heading the CBI, John Cridland, is not leaving things to chance. Already on the CBI blog and through the loss-making Guardian he is launching a counter-attack with a goodly dose of FUD (Fear-Uncertainty-Doubt), all in anticipation of a speech today to the British American Business Council. The intervention is helpful in that it reveals the tactics, with Cridland seeking to marginalise the EU issue by suggesting that other things are more important. But, in the FUD department, it is clear that the Norwegian and Swiss options worry them. Says Cridland, "Business has to make the nuts and bolts case for what our relationship with Europe should look like", then adding that: "Maintaining our influence to shape, and our access to, the Single Market will be central to that case".The CBI pitch is that, "We have to focus on a positive vision of reform so Europe does less of the things we don't want, and more of the things we do: boosting competitiveness and resisting bad policies that work against growth and stability". This leads to the punchline as Cridland says: "Let's be clear. Being a member of a reformed EU is the best way to preserve market access". He goes on to say:


There are some who say that we could retain access to the Single Market without being a member of the EU; that the UK could withdraw and have a relationship with the EU more akin to Norway's or Switzerland's. I'd urge them to really look at the detail.

Norway's membership of the European Economic Area (EEA) – being outside the EU but part of the Single Market – means that it still pays the bills and follows the rules but has much lower influence on EU decision making than if it had a seat at the table.

There we have the "little European" talking, and the last thing he wants us to do is look at the detail. Cridland thus avoids any reference to the globalisation of regulation and standards, where increasingly rules for the Single Market are determined by international bodies working at a higher level than the EU. Nothing therefore is said about the fact that we are unrepresented on many of these bodies, as the EU takes our seat, while countries like Norway and Switzerland have direct representation and are shaping the rules to which we must conform. This dishonesty pervades the CBI case, with Cridland calling in aid the Norwegian Conservative MP, Nikolai Astrup, who has told the CBI: "If the UK wants to run Europe, it needs to be in Europe. If you want to be run by Europe, feel free to join us in the EEA"."Taking rules without the power to influence them is certainly not my idea of much-touted greater sovereignty", says Cridland, neglecting to point out that Norwegian Conservatives are so keen to join the EU that they will do anything to denigrate the EEA. To an extent, this illustrates the scale of our problem. When it comes to the referendum campaign proper, Cridland, like Mr Cameron, has the easier job. They have no intentions of making the "positive case for Europe". Their strategy is to spray out the FUD, and tell only part of the story. It is left to us to tell people what has been missed out, and to complete the picture. In fact, neither EU nor EEA membership (outside of the EU) is entirely satisfactory, but as an interim measure, EEA membership keeps us in the Single Market, giving us time to work on a better deal.

But the most important thing for British industry is to break out of the cloying grip of "little Europe" and to embrace the wider world. Sadly, you will not hear this from the CBI.