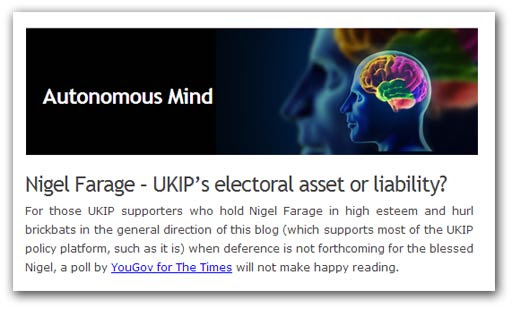 If you take the totality of this blog, you will find that – aside from the legacy media and, of course, the EU – the most frequent target of our ire has been the Conservative Party, and in particular David Cameron. By contrast, Mr Farage and UKIP are mentioned considerably less often, and then not always in an unfavourable light.However, UKIP is a political party, and Farage is a public figure – with his salary and expenses paid-for from the public purse. He is thus fair game for scrutiny. Despite that, though, there is a voluble band of his fans which seems to think that he, and his party should escape any form of scrutiny, and be immune from criticism. That same merry band of brothers, though, might care to consider the implications of the survey highlighted by Autonomous Mind which identifies whether voters have a positive or negative view of political leaders. From this, we see that Mr Cameron scores –16, Mr Miliband -27, Mr Clegg –45 and Mr Farage –24. In addition to these personal ratings, AM notes that 36 percent of respondents said they would never consider voting for UKIP, which is more than the 33 percent who would never consider voting Conservative, the 32 percent against the Lib-Dems and the 23 percent against Labour. This means that, for UKIP, Farage is more unpopular than his party. AM suggests that the message looks pretty clear. If UKIP are basing a strategy to build more support on the back of a Farage personality blitz, they are going in the wrong direction. Mr Farage is not the electoral asset his fans think he is. What actually matters more, though, is how this score would translate in any referendum campaign. And, on the face of it, Cameron's message would be better received than anything Farage had to offer. Fortunately, any advantage there is largely offset by Messrs Clegg and Miliband. But what we must do is recognise that the "surge" in support for UKIP at the county elections only amounted to around eight percent of the electorate. The cold, hard figures are telling us that the eurosceptic message is not sweeping all before it. Contrary to what some might aver, to point this out is not an "attack" on UKIP, or even Farage. The analysis is intended, as much as anything, to identify our own weaknesses, in the – sometime vain – hope that we can improve our performance and strategies. Here, though, the point about Farage is that he has always been resistant to alternative points of view. Thus, we have in him a man who, after twenty years of UKIP's existence, has still not crafted a credible exit plan from the EU, leaving him to rely on vague aspirations and slogans. In this context, I liken him to a instructor, who is taking student for a skydiving trip having convinced them that parachutes are not necessary. It will only be a matter of time, however, before his charges discover that leaving (the aeroplane) was the easy bit. It is the landing that will present the difficulties. As I have pointed out earlier, ten years ago we were telling Farage that we needed the equivalent of parachutes – our exit plan – in order to mastermind a safe exit from the EU. Farage's response, then and now, was and is to ignore the advice – and to get rid of those close to him who advocated the need for a plan. Sadly, while this may be history, the problem continues to the present. The fact that ten years ago we were calling for a credible exit plan, and that we have wasted ten years or more, does not remove the need in the present. And, as the possibility of a referendum grows closer, the need becomes ever-more urgent. Thus, the point will continue to be made in this blog, and elsewhere. And for those who have difficulties coming to terms with that, they may care to reflect that proper response to criticism is not to complain, but to respond to it.

For our part, we will continue to speak plainly.  In our view, without a credible exit plan, Farage is a liability, as that represents a failure to address the status quo effect. And, in any referendum campaign, that could be fatal.  Mr Farage could thus lose the referendum for us. That makes him part of the problem - and a legitimate target for criticism.