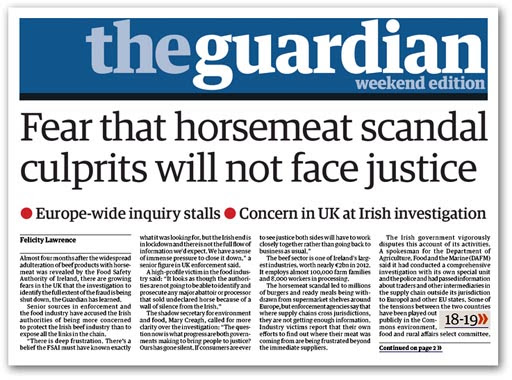 The agri-food industry is the second largest economic sector in the European Union, employing over 48 million people and is worth some €750 billion a year. Of that, one of the most valuable sectors is the meat industry, marketing high value products which form the basis of massive, secondary food processing industries.
The horsemeat fraud affair shone a bright light into the more unsavoury corners of these industries, and it is now unsurprising that the major players are not too keen on even further scrutiny, especially by a properly structured official inquiry, staffed by people who know what they are looking for, and have some understanding of the industry. It is a measure of how far the issue has slipped down the political agenda, though, that only the loss-making Guardian is reporting on how the inquiry process seems to have stalled – in part due to the intransigence of the Irish (where there are major criminal elements in the meat industry), and partly due to high-level political interference in the setting up of the inquiries. Add to this the incompetence of the House of Commons EFRA committee, chaired by former euro-luvvie Anne McIntosh, and you have an issue which is sliding into obscurity, with many of the problems that gave rise to the horsemeat affair entirely unrecognised and unresolved. Bizarrely, even though the necessary scrutiny has not yet taken place, the European Commission isalready acting, coming up with proposals to make financial penalties directly related to profits from "fraud", and mandatory spot-check testing. Neither of these proposals will have any effect on food fraud in general, an industry in its own account, which has become a vast, multi-billion criminal enterprise with a global reach. And it was of this that we were catching a glimpse during the height of the horsemeat scandal. So far, though, with at least 4,000 samples of meat have been tested, and millions of pounds-worth of food having been taken off sale – much of it destroyed – only three people have been arrested, and there are no major prosecutions in the offing. To that extent, the Guardian's concern is merited – expect that, like the rest of the British media, it has not thought to comment on, or even report, the Commission initiative. It really is quite stunning that what amounts to a major legislative programme, affecting the entire agri-food matrix, is being entirely ignored by the media. In a way, though, this is understandable. Since food regulation (and food policy in general) is dictated by Brussels, there is little British involvement in the legislative process. And nor can inquiries hope to do very much without factoring-in the European (and global) dimension, over which they have no jurisdiction or reach. Thus it is that the involvement of Brussels has sucked the life from an area of policy which once had the capacity to galvanise the nation and bring down governments. Now it is simply the minority interest of a loss-making newspaper which sees the potential for making mischief around the edges, as long as it doesn't dig too deeply. COMMENT THREAD
Posted by Richard at 19:03