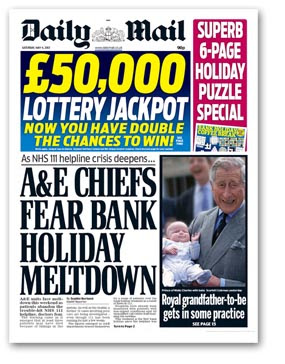 I will be in London today talking to the Campaign for an Independent Britain, on the general subject of "the way forward" for euroscepticism.
It will come as no surprise to readers of this blog that my list of things we must have in order successfully to secure an exit from the EU does not include the Farage Party, which is more and more looking like a cul-de-sac. And in a subliminal message which affirms that, we see the front page of the Daily Mail (left) where any news of the "great victory" is remarkably absent. Unfashionable it may be to say in certain quarters, but to attract the support of 6-8 percent of the electorate in council elections (and 9.4 percent in a by-election) is not evidence of a wildly successful popular campaign. And this is less so when, with each passing election, the pool of engaged voters steadily diminishes, as evidenced by the declining turnouts. As we have remarked before, the obsession with share of the vote, where turnout is in free fall, has the hallmarks of two bald men fighting over a comb – although it is more like a gang of people squabbling over its possession. 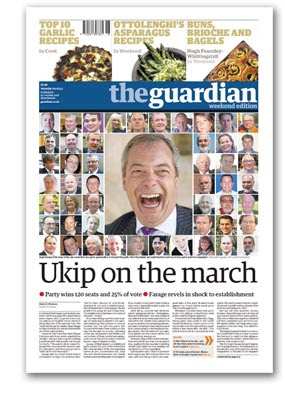 It is perhaps appropriate, therefore, that the newspaper that makes the greatest front-page display of the Farage Party success is the loss-making Guardian. This left-wing newspaper is only too well aware that the only way of resuscitating the flagging Labour campaign is to big-up UKIP in the hope of damaging the Conservative Party. Therein lies an uncomfortable truth. However, much it may protest otherwise, at its current level of support, when it has absorbed the transferable votes from the BNP, arising from the collapse of another one-man-band, by far the greater bulk of UKIP's support comes from disaffected Conservatives. Come the general election, which is the only election which matters to the political claque, the Left will certainly be egging on the "party of protest" in the expectation that it will continue to do disproportionate damage to the Right. And, confronted with the challenge, Mr Cameron's Conservatives will do whatever it takes to neutralise the threat. For, if Farage has succeeded in anything, he has certainly got the attention of the political classes. The ironic thing is that the most immediate outcome of grabbing the Guardian front page is one of two possibilities – either the election of the Labour Party to office in the 2015 general election (with or without the Lib-Dems), or resurgent Conservatives who will most likely offer as the bribe to restore their fortunes an EU referendum that we cannot possibly win. I would find this latter even doubly ironic – for UKIP to force upon the nation a referendum for which it is wholly unprepared, where it would be completely outflanked, then to saddle us with a lost vote which will set the eurosceptic movement back a generation. But then, whatever else, Farage has never included amongst his attributes anything approaching tactical acumen or strategic planning. Right now, though, his dogged pursuit of a twenty-year-old game plan might now look on the threshold of a breakthrough. But the truth is that it has no better chance of success now than when he first scribbled it on the back of a beer-soaked bar mat, at the end of a boozy planning session. Perhaps that "plan" emanated from the Grand Old Duke of York pub, because Farage is marching his troops to the top of the hill. Too soon, he will be marching them down again, back into the intellectual cul-de-sac from which his "cunning plan" originated. And that is what I will be telling the CIB today, plus a few more home truths. Those views won't necessarily be welcome, but I suspect there may be a few there capable of straight thinking and I won't have to make a quick dash for the exit. We shall see. COMMENT: COMBINED ELECTION THREAD
Posted by Richard at 23:36