Eurocrash: the EU needs a bailout 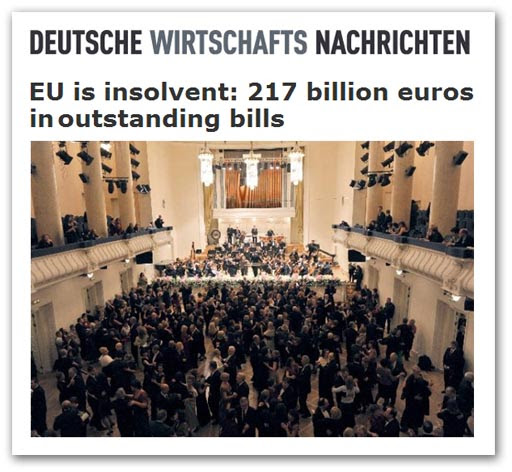 Since the member states have so far refused to furnish additional funds, the EU is by any normal benchmark insolvent.

As for the picture, DWN notes that for the EU grandees there are always enjoyable events for which, fortunately, others pay the bill. The picture shows a gala reception with a symphony orchestra in Tallinn on the occasion of the EU-accession of Estonia.

But now, since the annual budgets contain no financial means to pay bills, the party should be over. DWN shows no mercy on this. Like any start-up, it says, the founders know that it is entirely irrelevant whether the partners (in this case the EU states), have any commitments to financing. Each manager of a limited company are obliged to register in this case the insolvency. If he does not, he is liable and must expect a prison sentence.

In the EU, it says, the outstanding bills are astronomical - and nothing happens. By late 2012 the amount of outstanding obligations had reached the unprecedented level of €217.3 billion euros and they risk rising this year even further.

The European Parliament is thus calling for member states to "break the vicious circle of unpaid debt". The unpaid bills should not pollute next year's budget with "illegal debt", it says.

And now, with the Netherlands joining the UK in refusing to accept an amending budget, it looks as if the EU is badly in need of a bailout.

Adopting the liberal and imaginative solution which the Commission proposed for Cyprus, we can see the obvious way out. The bank accounts of all Commission employees should be frozen, the assets of the EU institutions sequestered and then there should be a massive series of compulsory layoffs and a fire sale of property.

But since, under EU law, the institutions cannot carry over debt from one year to another, we will have to express regret that we cannot lend and money to them. The whole lot will simply have to be wound up – terribly sad, we agree, but these things have to be done.
COMMENT THREAD
Posted by Richard at 06:54