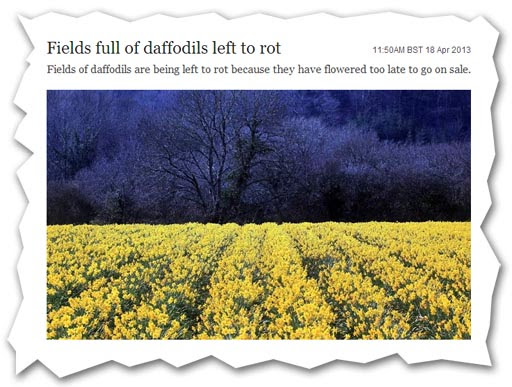 The Telegraph records today that fields of daffodils are being left to rot because they have flowered too late for Mother's Day and Easter and there is no longer a demand for them."The cold weather means the daffodils are way behind this year and all the varieties have flowered late", says Claire Taylor, who works at Taylor's Bulbs in Spalding, Lincolnshire. "A month ago we were struggling to meet demand as everyone wanted daffodils for Mother's Day and Easter and there were none around"."Now", she says, "they have appeared but the market has collapsed, orders have completely dried up and prices have fallen through the floor. It means there are lots of daffodils in our fields that we'll simply leave as there is no point in picking them".Thus does yet another icon of the Warmist creed bite the dust. As early as March 2004, the BBC was telling us that the effects of climate change meant there was increasing acceptance by Britons of spring arriving early. In, October 2004 the BBC was asking whether spring daffodils could become a thing of the past and then, in December 2006, the state broadcaster joyously reported that the flowers were causing "a stir" at a tourist attraction by making an unseasonably early appearance (above). They are not normally seen until early spring, but the first week in December has seen them blossom at Aberglasney Gardens in Carmarthenshire, said the report. Director Graham Rankin, of course, had never seen them burst into life so soon in Wales. But while they are spectacular, he had no doubt as to what lay behind this early appearance. He blamed "climate change caused by global warming" and said there were serious implication for nature's cycle. Alongside the Snowdon snowline, by 2007 the onset of the first daffodils in bloom had become one of the Welsh assembly government's climate change indicators for Wales and, in Februay 2008, the BBC was happily warbling that spring was coming "earlier than ever"."There are catkins out all around, and, although we're in the Midlands, the daffodils are almost in bloom," said Kate Lewthwaite, one of the Woodland Trust's researchers. "Wildlife is repsponding (sic) to our warmer springs, which are happening because of climate change. It's happening incredibly quickly, and some of them don't have the resources to adapt", she added. Interestingly, the Telegraph went even further, citing the curator of Kew Gardens. He told us that traditional British winters no longer existed and spring should be brought forward because the seasons had changed so much in recent years. 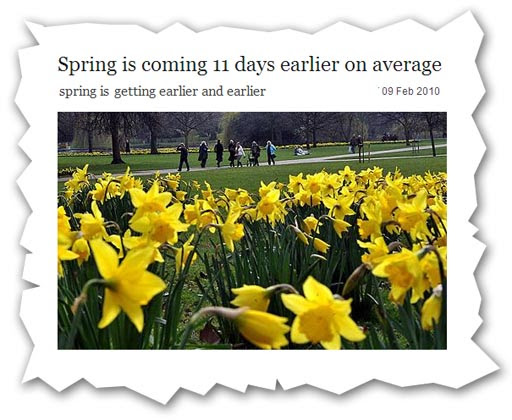 By February 2010, the Telegraph was joining in the fun, declaring that spring was coming "11 days earlier on average". Daffodils now commonly bloom in January, wrote Louise Gray, having Stephen Thackeray of the Centre for Ecology and Hydrology telling us that the long-term change "was most likely to be caused by global warming".

"The fact we are seeing such a coherent pattern of change over a variety of different environments would suggest a large scale driver like global warming," he said, being then joined by Richard Smithers, of the Woodland Trust, to say that delicate ecosystems were "the canary in the cage" of climate change.

And so what is "the canary in the cage" now telling us. If the early daffs were the result of global warming, what can we assume when millions of flowers are left to rot because they have flowered so late?

Strangely, from the Warmists, answers there are none.