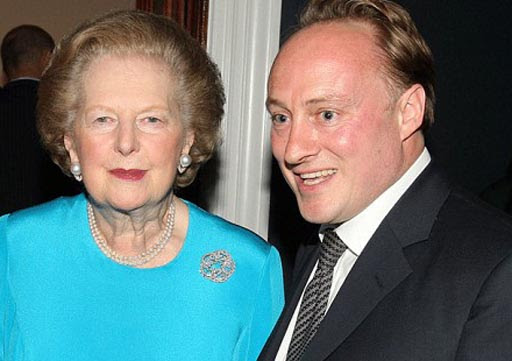 Guest postOne of the minor little mysteries of our time is how Andrew Roberts has somehow managed to win a reputation in the eyes of the world as a competent historian. It is true that when he was young, back in the 1990s he did write one or two not uninteresting books. But since then he has become something very different. Through assiduous self-promotion he has become a "celebrity historian", which means that, although he is given plenty of attention by the media, he no longer has to do his homework or get his facts right but can get away with writing the most amazing tosh. This becomes topical through the huge piece he published yesterday as the lead item in the pull-out supplement on "Margaret Thatcher, by those who knew her best", published by my own newspaper, the Sunday Telegraph. Apart from being, as usual, a relentless piece of self-promotion, this was riddled with errors which might have been understandable from a journalist trying to mug up the subject in a hurry. But from someone who likes to parade before the world as a historian it led one to wonder whether he ever bothers to check his facts at all. Let's start with two little factual howlers, He tells us that Mrs Thatcher was above all appalled and disgusted by the revelation that John Major carried on an affair with Edwina Currie because this was conducted "in Downing Street". Distasteful though it may be even to contemplate such a degrading subject, this sexual dalliance, according to the progenitor of the great salmonella-in-eggs scare, took place between 1984 and 1988. This was two years before Major was anywhere near Downing Street. Roberts goes on to allege that Mrs Thatcher was accused of having been responsible for the deaths of "368" Argentine sailors on the cruiser Belgrano. The generally accepted figure is 323. Much more seriously, however, since Roberts is alleged to be a "historian" and therefore someone who check his facts before rushing into print, he claims that Mrs Thatcher's "strident" "no, no, no" response in the Commons in October 1990 was somehow directed at the proposed "single European currency". Three times no, it wasn't. It was specifically directed, as I wrote yet again in my column in the same newspaper, at the claim by Jacques Delors a few days earlier that, within ten years, Europe would be ruled by a new government in which the European Commission would be the executive, the European Parliament would be the chief legislature and the Council of Ministers would be "the Senate". Three points from Delors. Three "noes" from Mrs Thatcher. No points to historian Roberts, who clearly hasn't got a clue what he was talking about. He then goes on to illustrate his claim that Mrs Thatcher was "always a more complex political operator than she liked to acknowledge" by pointing to the fact that she agreed to the Single European Act in 1986 and to Britain joining the ERM in 1990.

Clearly Roberts hasn't the faintest familiarity with the real story behind these two episodes, as he might have been able to establish had he bothered to read the detailed account given in that invaluable history The Great Deception, co-authored by myself and the proprietor/editor of this blog.

It is already quite well known, except to the great historian Roberts, that the only reason why Mrs Thatcher agreed to Britain joining the ERM was that she was forced to do so, totally against her will and judgement, by the ultimatum given her by her Foreign Secretary Geoffrey Howe, and her Chancellor Nigel Lawson, that, if she didn't agree to it, they would both, as the senior members of her government, resign.

It was hardly an example of how she was a "complex political operator". She was made the target of a shameless act of political blackmail.

As for her agreement to the treaty known as the Single European Act, North and I reconstructed in minute detail the story of how she was tricked into this in May 1985, when she was ambushed by her European colleagues at a European Council meeting in Milan.

Mrs Thatcher was totally misled, not least by her Foreign Office officials, into thinking that all that was at stake was moves to improve the functioning of the Common Market, something which in no way, in her view, required a new treaty.

What she was not told, either by her officials or by her treacherously Europhile Foreign Secretary Geoffrey Howe, was that what the "colleagues" were after, led by Jacques Delors, was a major new step on the road to integration, which would require a new treaty because it involved a further major surrender of powers to Brussels, including the biggest-ever number of "competences" on which national vetoes would be abolished.

Mrs T's real mistake, when she realised how badly she had been outmanoeuvred, was to pretend that the new treaty was just about the setting up of a ‘Single Market’, the issue she had thought it was about originally.

That was why she whipped and guillotined the treaty through the House of Commons in 1986, with only a handful of MPs voting against, because she couldn't stand the thought of having to explain how the "Single European Act" was not just about the Single Market but was in fact a further massive step forward to creating a "Single Europe", exactly as its title indicated.

Once again, Roberts clearly hasn't got the faintest idea what he is talking about, in claiming that Mrs T's agreement to this treaty shows how she was a "complex political operator".

He may in her declining years have sycophantically fooled her into thinking that he was such a "celebrity historian" that he was worthy to replace her as a trustee of the Margaret Thatcher Archive. But is he a genuine historian, who bothers to check his facts and has anything to add to our understanding of history? The answer to this must, alas, be three times "no".