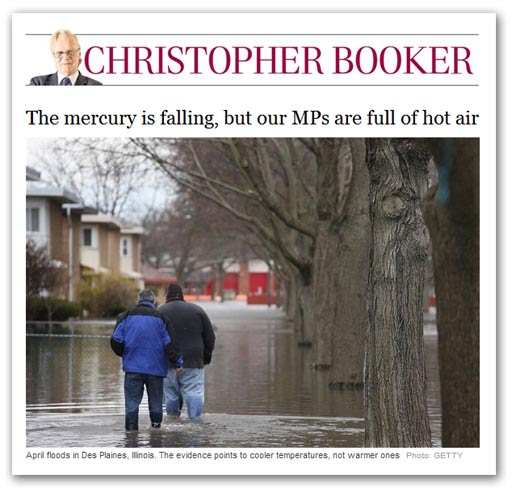 Last week writes Booker, it was reported that 3,318 places in the USA had recorded their lowest temperatures for this time of year since records began. Similar record cold was experienced by places in every province of Canada. So cold has the Russian winter been that Moscow had its deepest snowfall in 134 years of observations. Here in Britain, where we had our fifth freezing winter in a row, the Central England Temperature record – according to an analysis on WUWT – shows that in this century, average winter temperatures have dropped by 1.45ºC, more than twice as much as their rise between 1850 and 1999, and twice as much as the entire net rise in global temperatures recorded in the 20th century. But, hang on, Booker says. It wasn't meant to be like this. Weren't we told that, thanks to all that carbon dioxide we are pumping into the air, the world was faced with global warming; that, according to the computer models, temperatures were due to rise by at least 0.3ºC every decade; and that snowfall in Britain was "a thing of the past"?And the questions keep coming. Wasn't it to meet this unprecedented threat that our MPs voted almost unanimously for the Climate Change Act? Weren't we meant to be "giving a lead to the world" by cutting our CO2 emissions by 80 per cent in 40 years, doubling our electricity bills by heaping taxes on fossil fuels, and spending hundreds of billions on subsidising all of those 32,000 wind turbines? Somehow oblivious to this, Booker wearily continues, the world's emissions of CO2 have continued to hurtle upward, by 50 percent since 1990. Yet global temperatures have obstinately failed to rise. Attempts to get a global agreement on cutting CO2 emissions have collapsed. Pretty well every developed country, apart from Britain, is going flat out to build more fossil-fuelled power stations – leaving our own politicians almost alone in the world, with their fantasy that, by "decarbonising" our economy at unimaginable cost, we can still somehow give everyone else a lead in changing the earth's climate. Has there ever in history been such an almighty disconnect between observable reality and the delusions of a political class that is quite impervious to any rational discussion? This was superbly illustrated by two Commons debates on Thursday 18 April, when for the first time we had an MP, Peter Lilley, standing up in Parliament to confront the rest of them with an utterly withering blast of reality. On one side were those still lost in their bubble of make-believe, led by Tim Yeo, the man who earns £200,000 a year on the side lobbying for firms in the "renewable" industry. On the other was Lilley, simply mocking them all, pointing out with facts and figures just how "united in lunacy" they had become. When Yeo claimed that China has "some of the most ambitious decarbonisation plans in the world" (without admitting that he is paid up to £1,000 an hour by a firm trying to sell feedstocks to China for biofuels), Lilley reminded him that China is now adding more CO2 to the air every year than all Britain's emissions put together, and that by 2030 it will be responsible for half the world's total emissions.

So contemptuous was Lilley, and even at times so funny, that his speeches are well worth reading in full on the Commons website.

But, by golly, says Booker, when one sees what childish idiocies were being parroted by all those MPs around him, it brings home just what a problem this collective flight from reality is presenting us with.