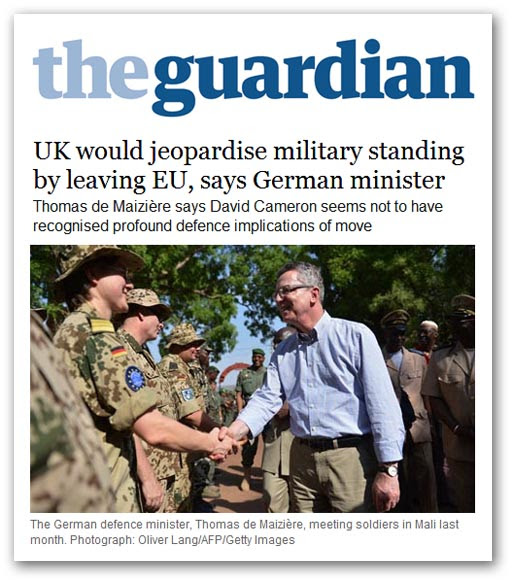 An exclusive interview of German defence minister Thomas de Maizière, for the Guardian highlights an apparent inconsistency, as the minister suggests that a UK outside the European Union would "jeopardise military standing".
Ostensibly, this is an absurd assertion, as the UK would continue to participate in joint military ventures through its membership of NATO, the activities of which are increasingly duplicating EU military initiatives. Unwittingly, though, de Maizière is revealing a mindset now prevalent amongst European defence ministers, who are sharing the view offered by this article, effectively conceding that the days of NATO are numbered. With the EU Foreign Affairs council just concluded in Luxembourg, with defence ministers present, one can see the writing on the wall, as ministers grapple with plans to reactivate the battlegroup concept – effectively moribund since 2007 – prior to a major defence council in December, when we expect to see significant developments in the EU's Common Security and Defence Policy. On the other hand, with NATO operations in Afghanistan winding down, the glue that binds the North Atlantic Alliance is melting away. The United States is looking east, with North Korea currently dictating defence priorities, drawing further away from NATO and reducing its European presence. Behind the scenes, what we are also seeing is a gradual insitutional merger between the EU and NATO. So deep is the "strategic partnership" that the European components of NATO are becoming completely integrated with the EU military structures, to the point where they are inseparable. In the fullness of time – and now not very far distant – we will witness a restructuring of NATO, comprising EU elements, the non-EU European elements and the North American elements (US and Canada). But the heart of the NATO will become its 21 EU members, who will be the driving force. It is in that context that de Maizière's comments must be seen. He asserts that, "If Great Britain leaves the EU, it would be a great disappointment to us. It would weaken Nato, it would weaken the British influence within Nato. I think from a military point of view the disadvantages for Great Britain would be bigger than the advantages".De Maizière is effectively saying that full participation in NATO (as it is about to become) will be dependent on membership of the EU, the latter having engineered a reverse takeover. NATO, at a European level, becomes "EUNATO".Increasingly, we can also see the United States channelling its initiatives via the European Union, quite deliberately in an attempt to keep Britain within the EU, with the United Nations also dealing with the EU as the partner of record. All this will be (and is being) designed to convey precisely the impression de Maizière has given theGuardian. This is more that the usual FUD, and represents a structured attempt to undermine UK independence. When it gets to the stage that even military co-operation with the United States is channelled through the EUNATO complex, Britain will no longer have the option of bilateral relations with the US. The UK will be locked in to the EU, whether it likes it or not. However, what de Maizière omits to tell us is that there is provision for actors to take part in EU institutions without being members of the EU. This is typified by Norway being a participant in European Defence Agency initiatives. Thus, the UK outside the EU could still elect to take part in EU defence ventures, on an ad hoc basis, losing nothing by being outside the fold.

But then, you do not expect the "colleagues" to tell the whole story. It would spoil their game and reduce the impact of their message.