Booker: the lady's for turning 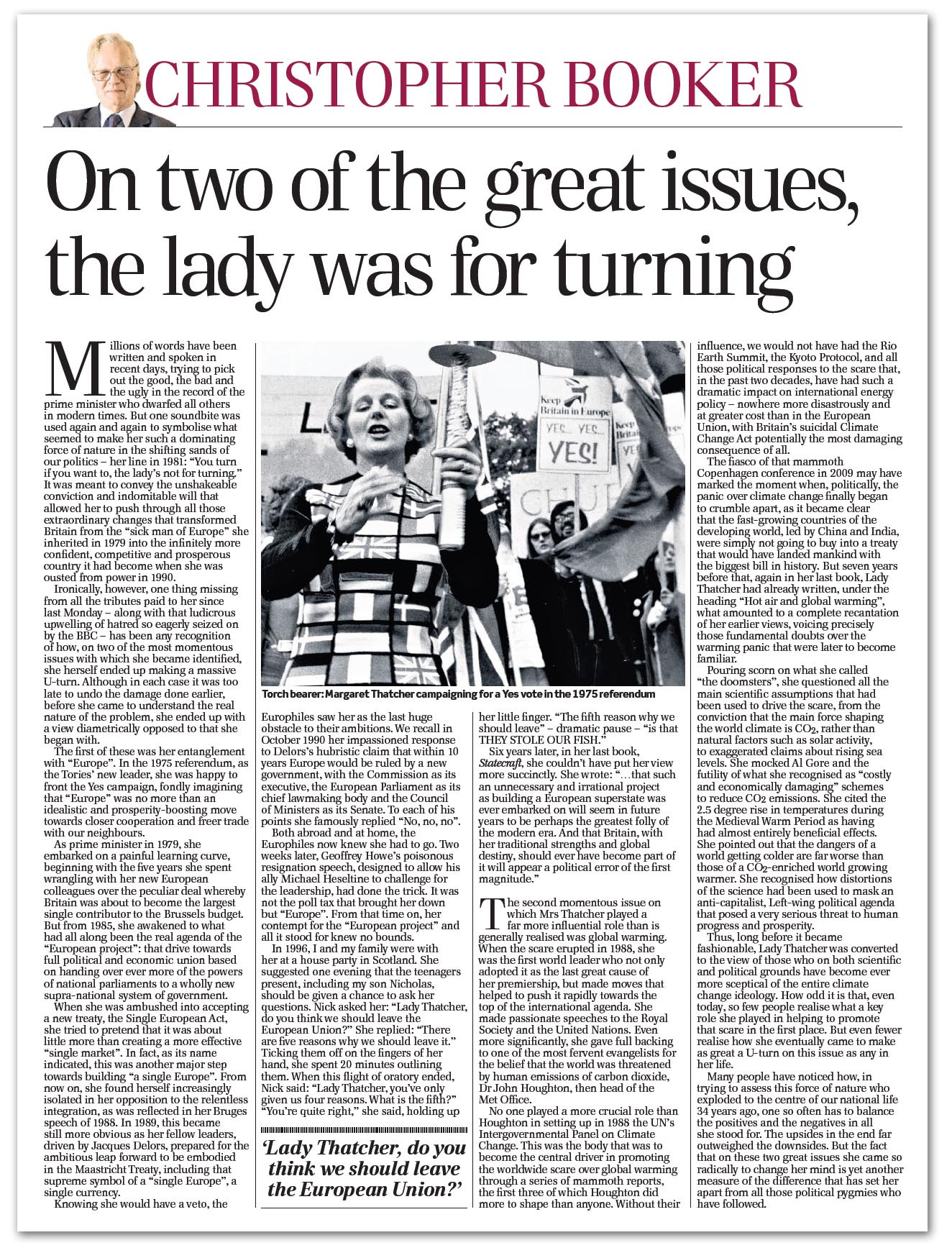 Millions of words have been written and spoken in recent days, writes Booker trying to pick out the good, the bad and the ugly in the record of the prime minister who dwarfed all others in modern times.

But one soundbite was used again and again to symbolise what seemed to make her such a dominating force of nature in the shifting sands of our politics – her line in 1981: "You turn if you want to, the lady's not for turning".

It was meant to convey the unshakeable conviction and indomitable will that allowed her to push through all those extraordinary changes that transformed Britain from the "sick man of Europe" she inherited in 1979 into the infinitely more confident, competitive and prosperous country it had become when she was ousted from power in 1990.

Ironically, however, one thing missing from all the tributes paid to her since last Monday – along with that ludicrous upwelling of hatred so eagerly seized on by the BBC – has been any recognition of how, on two of the most momentous issues with which she became identified, she herself ended up making a massive U-turn.

Although in each case it was too late to undo the damage done earlier, before she came to understand the real nature of the problem, she ended up with a view diametrically opposed to that she began with.

The first of these was her entanglement with "Europe". In the 1975 referendum, as the Tories' new leader, she was happy to front the Yes campaign, fondly imagining that "Europe" was no more than an idealistic and prosperity-boosting move towards closer cooperation and freer trade with our neighbours.

As prime minister in 1979, she embarked on a painful learning curve, beginning with the five years she spent wrangling with her new European colleagues over the peculiar deal whereby Britain was about to become the largest single contributor to the Brussels budget.

But from 1985, she awakened to what had all along been the real agenda of the "European project": that drive towards full political and economic union based on handing over ever more of the powers of national parliaments to a wholly new supranational system of government.

When she was ambushed into accepting a new treaty, the Single European Act, she tried to pretend that it was about little more than creating a more effective "single market". In fact, as its name indicated, this was another major step towards building "a single Europe".

From now on, she found herself increasingly isolated in her opposition to the relentless integration, as was reflected in her Bruges speech of 1988. In 1989, this became still more obvious as her fellow leaders, driven by Jacques Delors, prepared for the ambitious leap forward to be embodied in the Maastricht Treaty, including that supreme symbol of a "single Europe", a single currency.

Knowing she would have a veto, the Europhiles saw her as the last huge obstacle to their ambitions. We recall in October 1990 her impassioned response to Delors's hubristic claim that within ten years Europe would be ruled by a new government, with the Commission as its executive, the European Parliament as its chief lawmaking body and the Council of Ministers as its Senate. To each of his points she famously replied "No, no, no".

Both abroad and at home, the Europhiles now knew she had to go. Two weeks later, Geoffrey Howe's poisonous resignation speech, designed to allow his ally Michael Heseltine to challenge for the leadership, had done the trick. It was not the poll tax that brought her down but "Europe". From that time on, her contempt for the "European project" and all it stood for knew no bounds.

In 1996, I and my family were with her at a house party in Scotland. She suggested one evening that the teenagers present, including my son Nicholas, should be given a chance to ask her questions. Nick asked her: "Lady Thatcher, do you think we should leave the European Union?" She replied: "There are five reasons why we should leave it".

Ticking them off on the fingers of her hand, she spent 20 minutes outlining them. When this flight of oratory ended, Nick said: "Lady Thatcher, you've only given us four reasons. What is the fifth?" "You're quite right", she said, holding up her little finger. "The fifth reason why we should leave" – dramatic pause – "is that THEY STOLE OUR FISH".

Six years later, in her last book, Statecraft, she couldn't have put her view more succinctly. She wrote: "…that such an unnecessary and irrational project as building a European superstate was ever embarked on will seem in future years to be perhaps the greatest folly of the modern era. And that Britain, with her traditional strengths and global destiny, should ever have become part of it will appear a political error of the first magnitude".

The second momentous issue on which Mrs Thatcher played a far more influential role than is generally realised was global warming. When the scare erupted in 1988, she was the first world leader who not only adopted it as the last great cause of her premiership, but made moves that helped to push it rapidly towards the top of the international agenda. She made passionate speeches to the Royal Society and the United Nations.

Even more significantly, she gave full backing to one of the most fervent evangelists for the belief that the world was threatened by human emissions of carbon dioxide, Dr John Houghton, then head of the Met Office.

No one played a more crucial role than Houghton in setting up in 1988 the UN's Intergovernmental Panel on Climate Change. This was the body that was to become the central driver in promoting the worldwide scare over global warming through a series of mammoth reports, the first three of which Houghton did more to shape than anyone.

Without their influence, we would not have had the Rio Earth Summit, the Kyoto Protocol, and all those political responses to the scare that, in the past two decades, have had such a dramatic impact on international energy policy – nowhere more disastrously and at greater cost than in the European Union, with Britain's suicidal Climate Change Act potentially the most damaging consequence of all.

The fiasco of that mammoth Copenhagen conference in 2009 may have marked the moment when, politically, the panic over climate change finally began to crumble apart, as it became clear that the fast-growing countries of the developing world, led by China and India, were simply not going to buy into a treaty that would have landed mankind with the biggest bill in history.

But seven years before that, again in her last book, Lady Thatcher had already written, under the heading "Hot air and global warming", what amounted to a complete recantation of her earlier views, voicing precisely those fundamental doubts over the warming panic that were later to become familiar.

Pouring scorn on what she called "the doomsters", she questioned all the main scientific assumptions that had been used to drive the scare, from the conviction that the main force shaping the world climate is CO2, rather than natural factors such as solar activity, to exaggerated claims about rising sea levels. She mocked Al Gore and the futility of what she recognised as "costly and economically damaging" schemes to reduce CO2 emissions.

She cited the 2.5 degree rise in temperatures during the Medieval Warm Period as having had almost entirely beneficial effects. She pointed out that the dangers of a world getting colder are far worse than those of a CO2-enriched world growing warmer. She recognised how distortions of the science had been used to mask an anti-capitalist, Left-wing political agenda that posed a very serious threat to human progress and prosperity.

Thus, long before it became fashionable, Lady Thatcher was converted to the view of those who on both scientific and political grounds have become ever more sceptical of the entire climate change ideology. How odd it is that, even today, so few people realise what a key role she played in helping to promote that scare in the first place. But even fewer realise how she eventually came to make as great a U-turn on this issue as any in her life.

Many people have noticed how, in trying to assess this force of nature who exploded to the centre of our national life 34 years ago, one so often has to balance the positives and the negatives in all she stood for. The upsides in the end far outweighed the downsides.

But the fact that on these two great issues she came so radically to change her mind is yet another measure of the difference that has set her apart from all those political pygmies who have followed.