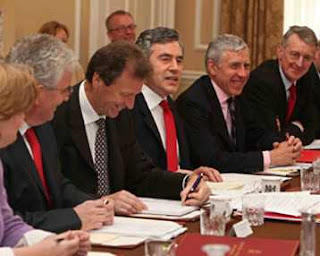 It really is very hard to tell whether Gordon Brown, when he originally made his pledge to create "British jobs for British workers" at the September Labour Party conference, was attempting to deceive, or genuinely did not know that any such pledge would contravene EU law.

Many people tend to assume that our masters actually know what they are talking about but this is a fragile assumption. He could very well be that Brown shares with many of our ruling classes a profound ignorance of EU matters – in many ways a necessary condition for supporting the "project".

But, even as he has tried to claw back some of the ground from a pledge that simply cannot be delivered, with a very-much watered-down pledge that he would set up a training scheme for unemployed British workers, that too is unravelling.

According to The Daily Telegraph John Denham, the "skills" secretary, has now admitted that new training places what are intended to help the home-grown workforce can also go to foreigners, even though the point of the scheme is to enable British workers to compete better against immigrants.

Nevertheless, in an attempt at damage limitation, Denham told Sky News that: "British workers will take up the majority of these training places and will be better equipped to get the jobs that they lose out on, not because of discrimination, but because they don't have the skills to compete."

However, since EU citizens are entitled to take up Modern Apprenticeships, courses at further education colleges and a range of skills-based courses, and even asylum seekers and those granted leave to remain are also able to take up "Entry to Employment" courses, Denham has no means of determining how many courses will go to foreigners and how many to British citizens.

As we have remarked before – and will no doubt again – our politicians seem to live in a fantasy world of their own making, unable to come to terms with the fact that they are no longer in control.

Only by fostering this fantasy, it seems, could any otherwise sane person be prepared to give more power to the European Union which has already robbed our government of so much power. Assuming Gordon Brown and his ministerial colleagues are actually sane, is there any other explanation?