The true cost of the European Union 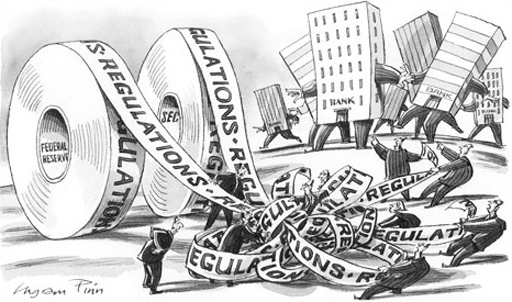 According to the recently published 354-page annual report on Competitiveness, produced by the EU commission and available on the Europa website, "suffocating red tape" is blamed for much of Europe's sluggish performance. The commission also states that the EU could raise overall GDP by 12 percent through adopting an American-style "regulatory burden".

This startling finding is buried an article published in today's Daily Telegraph, written by Ambrose Evans-Pritchard, which focuses mainly on "China's lightning advance into the production of cars, computers and high-tech industry" which is posing "a serious threat to Europe's economic base".

So swiftly do you pass by the 12 percent figure that it barely registers. You have to do a double-take before the enormity of the sum hits home. In round figures, the GDP of the EU member states is £5 trillion. That is another of those enormous figures that is difficult to comprehend. With all the noughts, it comes to £5,000,000,000,000.

Sheepishly, the commission goes on, in an attempt to justify its imposts, stating:


regulations exist in order to correct distortions, guarantee the basic economic rights and to promote objectives such as consumer protection or the quality of environment. At the same time though, it concedes, regulations limit the choices which individuals and enterprises can make, and compliance with regulations usually involves costs.

It then cites an academic study that finds that "entry regulation may be acceptable if it leads to higher consumer welfare in terms of factors such as product quality, water pollution, death from accidental poisoning or the size of the unofficial economy."

And guess what? The story was buried in the Business section, and you have to work out the cost, in figures for yourself. Why wasn't £600,000,000,000 spread across the front page? Silly me… Mr Blunkett and his "paternity battle". The political soap opera is so much more important, don't you think?
Posted by Richard at 14:30