Please don't call it a summit 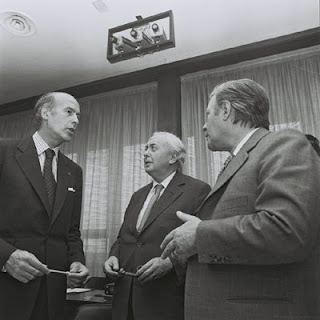 Slightly after 6.30 this evening the heads of government and some heads of state of the 25 members of the European Union will arrive at the Justus Lipsus building in Brussels for the second European Council of the Dutch presidency.

Says the council website, European Council is the name given to the regular meetings of Heads of State and Government of EU Member States, and the President of the European Commission. Sometimes, it adds, it is also called a summit.

But summit it most definitely is not. Although not included in the original Treaty of Rome, the council is an institution of the European Union. It was formally recognised in the Maastricht Treaty and, within the new constitution, it is proposed that it will become a fully-fledged tier of the emerging government of Europe. It is, in effect, the "cabinet" of the EU.

Right from the start, this was the intention of its founder, none other than Jean Monnet, who initially called it the "provisional European government".

That was back in 1972, at the Paris summit on 18 October, the day after Heath's European Communities Bill received Royal Assent. The idea for this summit, to celebrate the "enlargement" of the "Six" to the "Nine", had also originated with Monnet where, amongst other things, Heath called for "a clear timetable for economic and monetary union".

By and large, however, the summit was inconclusive. Monnet felt it had lacked focus and, more importantly, mechanisms for carrying its resolutions forward. His great regret in establishing his "community", the Treaty of Rome had not set up "a supreme body to steer Europe through the difficult transition from national to collective sovereignty". By the end of August 1973, he had decided to remedy this deficiency.

Monnet came over to England to discuss his proposal with Ted Heath at Chequers on 18 September 1973, telling him "we must give public opinion the feeling that European affairs are being decided: today, people have the impression that they’re merely being discussed."

Heath readily agreed, but had a reservation about making the proposal public. "Let's just do it," he told Monnet. He also worried about the term "provisional government". "That would get me into great difficulties." he said.

Monnet then approached Georges Pompidou and Willi Brandt. They were equally enthusiastic and neither shared Heath's reservations about the title, although Pompidou warmed to the name "European Union". A member of Pompidou's staff was heard to inquire of a close confidant of Pompidou what this phrase meant. The reply came, "nothing… but then that is the beauty of it".

In late September, Pompidou mentioned Monnet's proposal at a press conference. Heath then took up the baton at the Conservative Party conference on 13 October. "I believe", he said,

...that already some of my colleagues as Heads of Government feel the need for us to get together regularly without large staff so that we can jointly guide the Community along the paths we have already set. I would like to see the Heads of Government of the member countries of the Community meeting together, perhaps twice a year, as I have said, alone and without large staffs, with the President of the Commission being present, as he was at the Summit …our purpose in meeting together would be to lay down the broad direction of European policy.

Heath failed to mention that he was talking about what was being called a "provisional government", and said nothing about it being intended to steer Europe through the "transition from national to collective sovereignty".

Two weeks later, on 31 October, Pompidou told his Cabinet that regular meetings of heads of states were needed "with the aim of comparing and harmonising their attitudes in the framework of political co-operation". He wanted the first meeting to be held before the end of 1973.

Monnet was now confident that, despite the turmoil into which the world had suddenly been plunged that autumn by the Yom Kippur war in the Middle East, his plan was back on track. Then, as he was to recall, "when all seemed well, everything was thrown into turmoil".

In the aftermath of the war, the price of oil had quadrupled, threatening chaos to western economies. The governments of the Nine rushed to strike individual deals with the oil sheikhs. Heath was later to write that, at this moment, the Community:

...lost sight of the philosophy of Jean Monnet: that the Community exists to find common solutions to common problems. Each member state drifted back to seeking its own, unilateral solutions. So we all had to relearn painfully that there is no solution if we act on our own.

Despite this, Monnet continued to make progress with his plan. By March 1974 he was circulating another paper, proclaiming:

Existing European practices have proved inadequate as a means of enabling our countries to organise themselves for collective action… We must break out of this vicious circle, in which the common interests of the Community countries are inadequately served. The existing European institutions are not strong enough today to do it on their own.

Then, in the three leading Community states, there were changes at the top table. In a general election in Britain, Heath was replaced by Wilson. In Germany Brandt retired, to be replaced in May by Helmut Schmidt. The same month in France, after Pompidou had died, he was replaced by Valéry Giscard d'Estaing.

The old alliance between Pompidou and Brandt was soon replaced by a similar friendship between Giscard and Schmidt. The two new Franco-German leaders soon agreed that there should be "no more separate national actions, only European actions". They accepted Monnet's "provisional government", giving it the title "European Council".

The new body was approved at an informal meeting of heads of government at the Elysée on 14 September 1974.

The Council's first meeting was held in Paris on 9-10 December 1974. Its main business was to make the Council a permanent institution. Giscard pointed out that there had only been three "summits" between the heads of government in five years. They had to become "more organised" and regular, as Monnet had proposed.

Nothing appeared in the communiqué about the Council becoming a "provisional government", but one of its first actions was to ask the Belgium prime minister, Leo Tindemans, to draft a report on how further integration could be achieved. Giscard brought proceedings to a close with the words: "The Summit is dead. Long live the European Council".

Yet, despite this landmark in the evolution of what was now becoming known as "European construction", journalists and others continue to refer to meetings of the Council as "summits". Even today few realise the significance of what had happened. Monnet himself, however, had no doubts. In his Memoirs, he wrote:

...the European institutions were in charge of immense sectors of activity, over which they exercised the share of sovereignty that had been delegated to them. But if they were to work effectively, the governments had to have the same European will and be prepared, acting together as a collective authority, to transfer the additional sovereignty required to achieve a true European Union. The creation of the European Council supplied the means for reaching that essential decision. A major step had been taken.

It was, effectively, Monnet's last great coup. His "provisional government" survives to this day, so, as the heads of government and state arrive today in Brussels for their European Council, please don't call it a summit.
Posted by Richard at 18:07