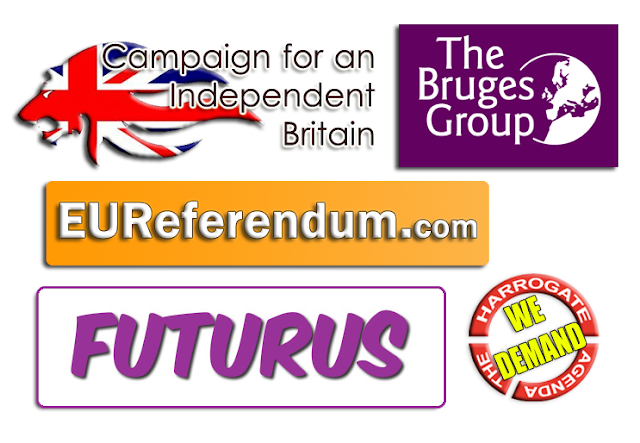 Since the 2015 general election we have seen a flurry of referendum related activity. It has since tailed off as the news agenda settles back into the usual routine, but we have seen a microcosm of how the referendum debate will play out. We have seen how the opposition intends to run their campaign and the arguments they intend to run with. This exemplifies the need for creative arguments they are not prepared or equipped to counter.

The Yes campaign is familiar with the old Eurosceptic tropes as we are. They are well briefed to deal with them, they have establishment resources with to disseminate their meme driven case and they show little hesitation in bending the truth.

If you are reading this we assume you the reader are familiar with the case for leaving the EU. Much effort will go into reinforcing that case in the coming months, thus we are content to leave that to others. What concerns us is that leading the leading EU advocacy groups make the case we  eurosceptics have yet to offer a credible vision of what a post-Brexit Britain looks like.

As it happens, this is something of a lie and such groups, namely Business for New Europe will seek to ignore any such submission. The respective emerging No campaign groups have badly dropped the ball in this respect. It is a matter of urgency that a Brexit plan be at the forefront of our efforts.

The Yes campaign will seek to present Brexit as a leap not the dark involving years of diplomatic and political effort to end up in a marginally worse position than where we are today. On a superficial level, they are absolutely right. There isn’t much of an incentive to leave the EU unless we can demonstrate the tough questions have been answered – and that we will be in a better position for leaving.

Thus, a careful analysis of how we leave the EU and the diplomatic avenues available to us is absolutely critical. Our alternative must be credible and workable. Without doing this groundwork we end up promoting flawed solutions that ultimately lose the argument. The Yes campaign will be well briefed to pick holes in the commonly suggested options, some of which may not even be available to us by the time we go to the polls. By then a new EU treaty may be on the table.

In this respect how we leave dictates much of the substance of the No campaign. For instance, should we promote ending free movement of people we then close of a number of workable avenues, forcing us into a cul-de-sac of limited options, all of which can be argued will leave Britain is a worse position.

We also believe that referendums are not won on a negative premise. Continued griping about immigration cannot be a central theme lest the No campaign be tainted by accusations of xenophobia and jingoism. The Yes campaign will seek to position itself as internationalist, liberal and modern proposition, and will paint No as a withdrawalist, isolationist position. If they succeed, the vote is lost.

Consequently we are in a space race for the middle ground to win the progressive crown. How we leave then becomes central to the message and the tone of the whole campaign. For this reason we present Flexcit.

In Flexcit we examine in detail the alternatives to the EU, the pitfalls and the opportunities, but also present a new model of governance as an incentive to voters, encompassing direct democracy, real localism and a written constitution. We call it The Harrogate Agenda. Without a deal sweetener it will be difficult to ask the majority to take the gamble. There is also a strategic purpose to this.

The No campaign cannot get carried away making false promises and raising expectations when all of the Brexit solutions require a degree of compromise and will not necessarily produce the results that many Eurosceptics expect. As we outline, Brexit does not give us complete control over our borders nor does it especially mean a sizeable reduction in regulation. Thus the campaign must be able to offer something tangible that could not be achieved as EU members.

In this exit plan we offer our analysis of the respective Brexit solutions, the most realisable option, the political realities of achieving it and the timing. As we outline, Brexit is a process rather than an event and leaving the EU is just the beginning of a long road to economic and democratic reform. The importance of the No campaign grasping this is paramount. It has massive ramifications for how the No campaign is conducted and unless we take an original approach we can expect to be bogged down in the same old tired and boring arguments and lose them. Flexcit is our secret weapon that gives us the edge. The Yes campaign is not equipped to handle it.
Posted by Pete North at 19:32