Are you with us? 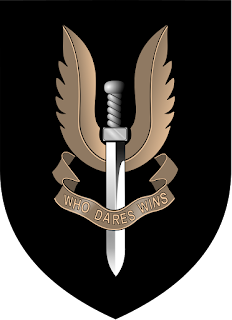 Ukip like to cast themselves as "the people's army". If that analogy holds then they are cannon fodder. What we need in this coming referendum is special forces carrying out special operations. We have seen that numbers without co-ordination and strategy does not get results. For all Ukip's resources and exposure it still failed to get more than one MP - attributable to their own lacklustre campaign.

For a long time we have warned that the EU referendum campaign will follow a similar path with well funded operations springing up from nowhere, attracting much publicity, with plenty of casual support, but in the end lack the expertise to put it to work.

Looking at The Know's Facebook page we see it has already attracted a large number of "likes", but if we look at the content we see them making all the classic mistakes, making promises that Brexit is unlikely to achieve - and complaining about bent bananas. If I was going to design a false flag operation, it would look a lot like The Know.

They're essentially sucking up the kipper support and relabelling it - and that's not going to win any new territory. Here follows a glorious example of the sort of people they're attracting:

And then there's this little gemstone...

You don't have to dig deep to find it. This is what contemporary euroscepticism looks like now. Obviously such people are no use to us in building a progressive and outward looking case for Brexit, and the best thing The Know could do is serve as a cesspit to keep that lot distracted. We can't tell you just how depressed that makes us feel - but we're not going to take it lying down.

It is our view that we can do more with less. The Know and Business for Britain will waste a lot of money and energy rushing around well before the referendum campaign kicks off, boring their audiences and making an irrelevance of themselves. It is our view that the referendum will be much later than anybody thus far anticipates, so the focus must now be on building a reserve unit who can pick up where they tail off and reach new audiences with new arguments.

We're sceptical about how useful big ticket websites can be - and these eurosceptic start-ups tend to just feed from the existing pond, each cannibalising each-others support. There is no value in this. Instead what we need is a core of bloggers each with a respectable Twitter following. Individuals, not organisations will turn the tide. By our reckoning we're going to need thirty such people, who we are happy to train and lend support to. Thinkers who influence other thinkers are worth ten thousand kippers.

We are old hands at social media and blogging and can advise anyone who wants to join such a team. This team will need to crosslink and retweet each-other - putting egos and minor differences aside. They don't necessarily need to work together, but co-operation helps growth. We need to start early on this because on the web, content is king, and for search engine optimisation, older blogs with more content leave a larger web footprint. The mission being to put clear blue water between us and the kipper grunters, to show that there is a liberal and progressive wing of euroscepticism that has larger concerns and a broader visions.

What we definitely don't want are immigration obsessives, climate change bores or people who will rant about bent bananas. We are looking for euro-sceptics. And by that we mean actual sceptics who express genuine scepticism over everything they see and hear - especially those who, like us, are sceptical of the nonsense the europhobes are presently belching out on an industrial scale.

If you have a forensic eye for detail and a shrewd eye we need to hear from you. This is going to require a lot of commitment, and running a blog is no small undertaking - but that's the challenge. We need an elite squad of mature, dedicated people who can take a brief, work to a strategy and think for themselves. If you think you are up to the job and this post resonates with you then get in touch. You know what's at stake and the time to act is now.