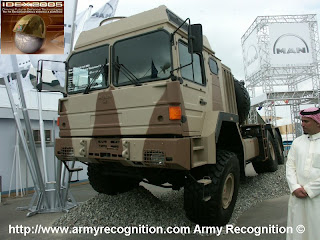 Following the loss of the column last week, displaced by a "souvenir edition" on the Live8 concert, Booker is back with a vengeance, this week leading with a story on European defence integration.

The issues raised, however, will be entirely familiar to Blog readers, having been rehearsed last week in this blog. However, given that the MSM seems to have almost given up reporting on defence issues, Booker's coverage – which focuses on the hike in the costs of FRES, from £6 to £14 billion - is both timely and necessary.

Booker also manages to raise the issue of the Panther and also the purchase of German trucks for the British Army.

Frankly, I find it worrying how little attention is given to these defence issues for, even if there is no interest in the hardware and the broader political implications, the government is commiting to enormous expenditure. As Booker points out, the procurement cost for FRES now equates to £600 for every taxpayer in the country.

Furthermore, as we pointed out, the system originally involved 900 vehicles with a total "lifetime cost" over 30 years of £49 billion. Booker last week asked the MoD for the "lifetime cost" of the 3,500 vehicles now proposed (which pro rata should be over £100 billion), but they failed to reply.

In what must rank as one of the most bizarre events in the history of British defence policy, therefore, Booker observes that what makes it even more startling are the lengths to which our Government seems to be going to hide all this from view. Mind you, the way the media is behaving, they need not have bothered.

Booker's second story is a weird tale about a Dorset village funeral director – OT for this blog, but worth a read. Story three is an update on the Lindstrand HiFlyer and the struggle to get it certified by the European Aviation Safety Agency and the fourth story points out that there was unhappiness recently when, in the Solent, the Queen had to review the fleet from a "bus shelter" perched on top of the Antarctic survey ship Endurance.

To provide her with a new Royal Yacht would have cost £60 million, observes Booker. This equates to two days-worth of Britain's £11.5 billion a year payments into the EU budget – or less than 15 of the Army's new FRES vehicles.