EU referendum: think of the farmers

Defra Secretary Owen Paterson has told Farmers Guardian that UK agriculture could be better served if Britain leaves the European Union.This was during an online discussion on the CAP, the same day that David Cameron finally announced he will offer the British public an "in-out" referendum on membership of the EU. Mr Paterson said the UK would "do a good job" of making its own decisions on agricultural policy. "Within Europe the CAP is moving away from pure food subsidy to a more environmental policy, and we are seeing that in the negotiations it is impossible to impose a one-size-fits-all policy", Paterson adds, then declaring, "I'm completely clear that as we move towards a more environmental policy, these sort of decisions are much better made at national and local level".Paterson is one of the Cabinet Ministers who is unequivocal about leaving the EU, although he remains realistic about the problems involved. As head of a department implementing more EU legislation than any other in Whitehall, he is acutely conscious that the slate cannot be wiped clean overnight. His caution is reflected in the FG editorial (free registration required), where News Editor Ben Briggs cautions Mr Cameron to spare a thought for the farmer who remains financially solvent because of his CAP cheque. "If a referendum pulls the European rug from beneath farmers' feet, there needs to be a constructive and consistent alternative in place to soften the blow", says Briggs. 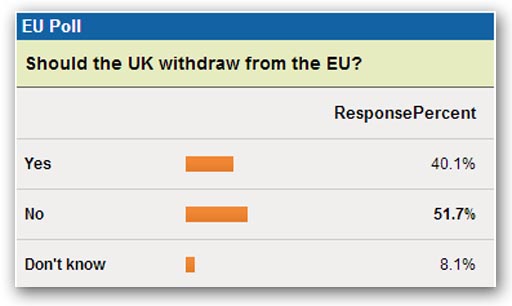 From a standing start, however, an FG on withdrawing from the EU gave 51.7 percent against the proposition, with 40.1 for, and 8.1 percent "don't knows". For the farming community, that is a pretty strong result against the EU, demonstrating the scale of the task the "outers" have to surmount. The "renegotiation" option was not offered in this poll, but one can assume that farming support for this will be high, which gives Cameron an in-built majority in the small but influential farming community. If the farmers come out against leaving, then they will be fully exploited by the europhiles. Paterson places great store on Hague's "audit of competences", but to a certain extent we are dealing with a moving feast, as the CAP undergoes yet another periodic reform, bringing in its wake a degree of uncertainty. If there was ever a good time to put withdrawal to the farmers, now is as good a time as any.

But, as Briggs says, there has to be a "constructive and consistent alternative in place to soften the blow".  Doubtless, that applies to most other sectors, and the population at large.  If people see leaving the EU as a leap in the dark, the status quo effect kicks in, and the voters hold on to nurse.

Think of the farmers: they show the way.