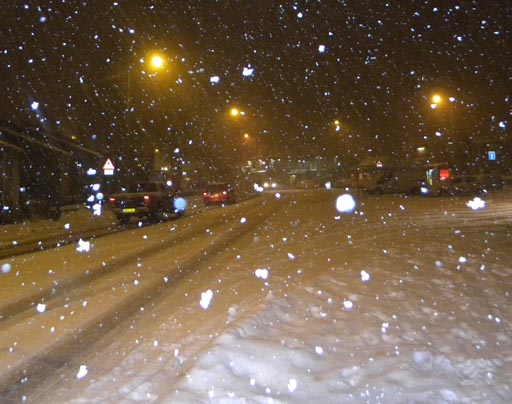 We've had seriously serious global warming here, coming in near horizontal at times, dumping about four inches in just a few hours after tea time yesterday (pictured above), keeping on into the wee small hours of this morning to about a foot overall. We haven't had it this bad since 1963.

This made a perfect backdrop to Tony Juniper whingeing in the loss-making Grauniad, offering a FUD-laden prediction that David Cameron's EU speech is "grave news for our environment".

Juniper thus paints a picture of hard-hearted (and presumably money-grubbing) Tory MPs, frustrated at their failure to cut what some ministers see as unnecessary environmental legislation through their red tape challenge (because many of the laws in question originate from Brussels).

But, with the opportunity afforded by the referendum to get us out of the EU, we can dump all that law and storm the heights of the sunlit uplands of a competitive economy, leaving behind sewage-blighted beaches and rampant air pollution.

The idea, though, that without the EU, we would suddenly be bereft of environmental law, and the protection that went with it, is about as laughable as Dr Viner's view of the rarity value of snow, but this has added hilarity when you realise that Juniper is bogged down by the ignorance of how his own country is governed.

If we take water pollution, for instance, even without the framework of EU law, we are signatories to the UNECE Convention on the Protection and Use of Transboundary Watercourses and International Lakes, adopted in Helsinki in 1992, coming into force in 1996.

Now that, you might say only applies to transboundary matters, and you would be right. However, this convention was supplemented by a protocol "done in London" on 17 June 1999, which came into force in 2005.

The objective of this Protocol is "to promote at all appropriate levels, nationally as well as in transboundary and international contexts, the protection of human health and well-being, both individual and collective, within a framework of sustainable development, through improving water management, including the protection of water ecosystems, and through preventing, controlling and reducing water-related disease".

With the addition of that magic word, "nationally" the water convention casts its spell on the UK domestic water management, even where there are no transboundary implications, potentially tying the British government into a web of binding commitments which could be enforced through the UK courts.

However, there is a delightful twist here. Although the UK signed the protocol, it did not ratify it, and opposed EU ratification, noting that the Community had already adopted legislation in this field which met all the substantive obligations imposed by the Protocol. The EU then in 2005 withdrew a proposal to adopt the protocol.

Despite this, the EEA countries of Norway and Switzerland did ratify, and are covered by the provisions of the protocol, which are binding on those parties who have ratified.

We thus have a situation where Norway, outside the EU, has committed to an international agreement which safeguards water supplies and the aquatic environment. Thus, on this – and similar provisions regarding air pollution - Tony Juniper doesn't need to pour out the FUD on the consequences of leaving the EU. He can simply call for the UK to ratify the UNECE water protocols and other agreements.

Given his alarmist response to leaving the EU, though, you might suspect that Mr Juniper has other agendas, and there you could well be right. But, when it comes to protecting our environment, we can be assured that there are enough safeguards available to make the EU supremely redundant.

And that also, is seriously serious.