EU politics: the irrelevance of the EU 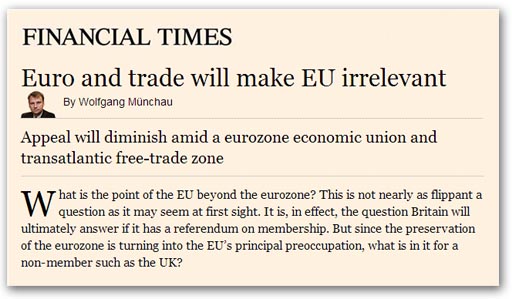 A little while ago, I wrote that we have to confront the prospect that there is an alarming number of people who lack the basic understanding of how the global and regional regulatory system works.
We can add to that number Wolfgang Münchau, the doyen's doyen who, today in the Financial Times, adds to the sum of human ignorance by declaring that, "If you are outside the EU, but inside the EEA, you have no vote on single-market policies. Norway and Iceland have to accept whatever the EU decides".
That, of course, is not true, not least because of the "veto" or "right of reservation" – set out in Article 102 of the EEA Agreement – to say nothing of being misleading, as both countries have considerable upstream influence that enable them to shape standards before they get to the EU voting stage.
Notwithstanding these little gripes, though, Münchau is beginning to ask the right questions, asserting that the benefits of the single market are "vastly exaggerated". They will in the longer term be subsumed by free trade agreements and, in particular, a transatlantic free-trade area incorporating the EU and the United States.
This has been something of a hobby-horse of the Financial Times and they are perhaps being more than a little over-optimistic if they believe that the agricultural systems each side of the Atlantic can be harmonised sufficiently to create a level playing field which would permit free trade.
With massive understatement, therefore, Münchau casually asserts that "hammering out" a treaty "would not be easy" but he is confident that even if Britain were outside the EU, it would without a doubt be a member of such a zone. Thus, in his book, "there can be no question of it being cut off from trade".
There, Münchau goes a little bit wobbly, as he asserts that, outside he EU, "the UK would still be a member of the European Economic Area". That is not strictly true. It could not happen without the UK joining EFTA and with amendments to the EEA Agreement.
Further, he has not caught up with the reality of the relationship of EEA countries with  the EU, but there is hope yet. While asserting that there would a "perceived loss of political power", which would be "unacceptable to the UK", he then says: "the argument misjudges the extent to which the UK can negotiate the terms of exit". Article 50, declares Münchau, "makes it possible for countries to depart, but leaves the details to the negotiating parties".
Then we get to the "killer point". Faced with the combined development of a eurozone economic union (which we cannot join) and a transatlantic free-trade zone, the added benefit of EU membership loses appeal if most of that benefit can be had outside". Thus we are told: "If one is absolutely certain that one will never join the eurozone, there really is not much of a point to being a member of the EU".
Münchau is not quite there yet, but with or without a transatlantic free trade area, we are seeing the convergence of global rules, with – as Booker points out - supra-regional standard-setting which makes the EU increasingly irrelevant.
That the doyen of all doyens is nevertheless asking about the relevance of the EU to Britain is good news. Once that question is asked, the politicians will find it increasingly difficult to give an honest answer, and we will be on our way out. Article 50 beckons.
COMMENT THREAD
Posted by Richard at 14:52