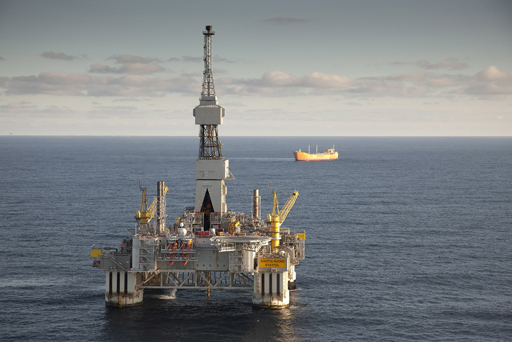 Although oil and gas production are major and valuable contributors to the Norwegian economy, the industry is not without its stresses. According to a report from Bloomberg last August, Norway desperately needs to simplify its rules for offshore oil rigs and reduce labour costs.
This was the finding of a government-appointed committee, which discovered that drilling costs in Norway were about 40-45 percent higher than in the UK. As a result, Norwegian companies were drilling less and exploitable resources were being left in the ground. Thus, the Norwegians need new regulations like a hole in the head - certainly according to Lundin Petroleum AB (LUPE), which holds a stake in the biggest oil discovery off the coast of Norway since the 1970s. President and Chief Executive Officer Ashley Heppenstall said of his government, "They’ve got to acknowledge the issue, and they've got to get the balance right between regulation and cost". 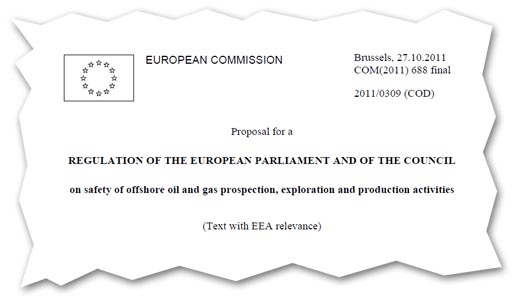 Despite this, on 27 October 2011 had already proposed its own regulations to cover offshore drilling,annoucing with great fanfare that their new law would "ensure that European offshore oil and gas production will respect the world's highest safety, health and environmental standards everywhere in the EU".

According to the Commission, the new draft regulation set clear rules "that cover the whole lifecycle of all exploration and production activities from design to the final removal of an oil or gas installation". And, because the Commission also decided that it had "EEA relevance", the very clear intention was that this should apply to Norway, the biggest gas and oil exporter in western Europe.

The greatest concern, however, was expressed by the UK industry. Said "Oil and Gas UK" - "the voice of the offshore industry":

Oil & Gas UK is extremely concerned by the European Commission's proposals for EU Regulation of offshore safety. While we will always support proper moves to improve safety standards, this proposal to dismantle the UK's world-class safety regime which is built on decades of experience and replace it with new centralised EU Regulation, is likely to have exactly the opposite effect. We are encouraged by the fact that the UK Government is of the same position and has signalled its intention to oppose the Regulation in the best interests of safety.

Surprisingly, though, the Norwegians were quite relaxed about the whole thing, and in a report from the EEA Joint Parliamentary Committee on 27 November 2012, we see why. "The Norwegian government has taken the view that the proposed regulation by the European Commission falls outside the geographic and substantive scope of the EEA agreement", it said. 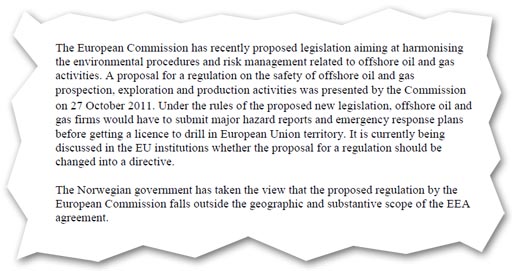 Thus, while Mats Persson of the europhile Open Europe asserts that Oslo has "exceptionally limited ability" to influence EU laws and its "veto" - or "right to refusal" – happens to be "exceptionally weak", here we have an interesting contrast.

On the one hand, the UK, a full member of the EU, is now concerned that it is to be exposed to a debilitating new EU law, which it opposes. However, it is likely to be approved by Qualified Majority Voting (possibly as a directive), over which it has no veto and thus has no means of blocking.

On the other hand, we have Norway, an EEA member. Although the Commission clearly wishes to apply the law to this country, its government has refused to accept it. On current state of play, Norway will preserve its economic interests and its right to legislate in this vital economic sphere.

Thus asks Autonomous Mind: "can we expect to see Cameron and Open Europe correct their false assertions?" "Or", he further asks, "will their rampant Europhilia and fetish for pleasing their masters in Brussels see them continue peddling blatant lies about Norway and Switzerland supposedly having no say in EU matters yet having to accept everything handed down from the EU bureaucrats?"