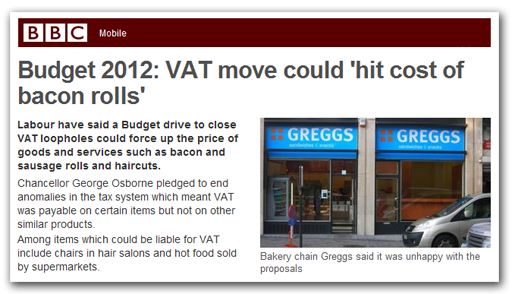 The Daily Mail and other media sources, including the BBC have been running stories on the budget proposal to impose VAT on hot take-out food.

Hitherto, things like bacon rolls and hot suasage rolls escaped VAT under our permanent derogation to the VAT Sixth Directive, which allows the to zero-rate most foodstuffs. Now, though, it seems that the preposterous Osborne is planning to bring them into the net, a deed which cannot be undone. The derogation once abandoned can never be restored.

Osborne says he wants to address "some of the loopholes and anomalies" in the tax system, follwing a report from the Office of Tax Simplification last year which called for an end to some existing tax breaks. But this particular proposal is set to cause a lot of grief, so this reason given doesn't really cut it.

As always, though, when you are confronting VAT, you are dealing with the EU and, although our gifted media always ignores the elephant in the room, you can bet your sweet life that, somewhere in here is lurking an EU dimension. And indeed there seems to be just that.

At the time, HMRC said the ruling had no implications for the UK, whence it continued to charge VAT on things like fish & chips and burgers, sold over the counter, but kept as zero-rated foods "which are warm simply because they happen to be freshly baked, are in the process of cooling down and are not intended to be eaten while hot".

However, more than a few VAT consultances and lawyer groups specialising in tax law disagreed with HMRC, such as here and here. They argued that take-out food in the UK should also be charged at the lower rate, which in this country is zero.

By last November, we ended up with the fish and chip shop owners getting together to fight the government on this. They were looking forward to securing a very healthy refund. They also expected to be able to knock around £1 off fish and chips, boosting the trade and stimulating the sale of fish.

The actual amount of revenue at stake has not been specified, but it is likely to run to several billions, if the HMRC lose their case. And what seem to be happening here is that, by harmonising the rate, making it cover all foods without the "freshly baked, etc.," exemption, the tax authoritities believe they can protect their revenue stream.

As long as some hot foods are charged at the lower (i.e., zero) rate, then all hot foods must be charged at that rate. By abolishing the zero rate for ANY hot foods, Osborne can charge the standard rate for them all. This gets HMRC gets off the hook on which the ECJ has impaled them.

Retailers are, of course, hoping that the proposals do not go ahead. Already, the impact of the proposal it such that it has already taken £30 million off the share price of the bakery chain Greggs. But that is small beer compared with what the chancellor stands to lose.

The one thing, though, that you can be sure of is that the media isn't going to tell you what's going on. People might start voting for UKIP for something equally stupid, and that would never do.