UPDATE: Our little George is getting a bit carried away with his success. He promises "a tidal wave" which will "sweep away" the "discredited" political class. Speaking to supporters outside his campaign headquarters, he said austerity and opposition to the war in Afghanistan had delivered him a win that his Respect party could repeat across northern towns and cities.

It ain't going to happen ... not the way he thinks.

The Westminster-centric Iain Martin, however, sees it through the national filter. It gets The Boy off the hook, he thinks, providing more of an embarrassment for Miliband than it does the Tories. Life does look so very different inside that Westminster bubble.

Channel 4 uses YouGov's Associate Director Anthony Wells for their damage limitation. Beating Labour was a great personal victory for Mr Galloway, but it "probably" does not tell us anything about Labour's standing nationally. By-elections are too idiosyncratic to shed light on the national picture, says Wells, adding: "It means nothing for the country (as a whole)".

Lone protester Thomas Johnson, 26, of Bradford, was less than impressed, yelling that Galloway was a "parasite" as he pelted him with eggs as he left his headquarters. Galloway said it was too early for protests as Johnson shouted: "He's a sycophant, he's a greedy leech, he's a parasite on this city". And that makes him different how? 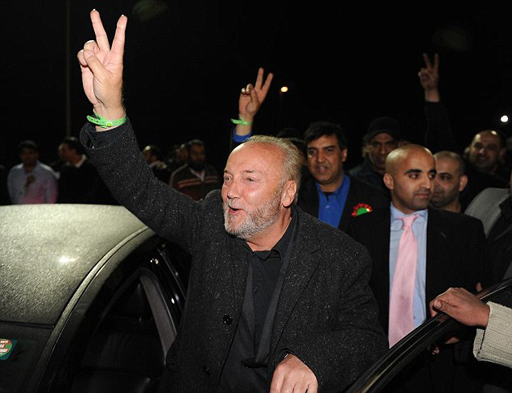 There is a real sense here of having "stuffed" the local parties, a rebellion against the duopoly of Labour and Tory, where the two major parties between them believe they own Bradford. Speaking to a local activist this morning, one who ended up working for Galloway, what came over as much as anything is a resentment at the two-party stitch-up on the local council. And they know Galloway can't break into that local mafia but, at least, as I was told, "he can speak for us" – tell it like it is.

For far too long, people have fallen into line and, with increasing reluctance, given their votes to these clowns in the polls but, completely under the radar came a man who could unite the Asian vote (which is as fragmented as the whites), and pull in support from the white communities.

With the best part of a 10,000 lead, the sheer scale of the rejection of the approved Labour candidate tells its own story. Completely under the radar, ignored by the media – local and national, none of which saw it coming – Galloway stormed the ramparts and took Labour's prize from them.

The difference here, from many other contests, is that by some mysterious and unknown chemistry, Galloway came over as a winner. People actually believed he could win and, in believing he could, made it so. And that is how perilously thin stand the political classes in this country. They win elections – on tiny fractions of the popular vote, out of habit – because that is the way of things.

But then along comes a maverick, a man who says it ain't so, and they believe him. And that much tells us all about the state of this country and the media. While the prattlers focus on their London-centric soap opera, the bubbling, seething resentment out in the real world catches them by surprise. Would that it was not Galloway – would that it was someone else. But against Galloway's 18,000-odd, UKIP struggled to pull in 1,000 votes, still trailing behind the Lib-Dims who also lost their deposit.

Already though, the establishment, with its media claque are moving in, setting up full damage limitation mode. They seek to present this as a one-off, an aberration. They need an orderly return to the status quo. And maybe it was a one-off, but it was also a very clear message to the political classes. The Westminster claque won't hear the message, of course. Not only don't they want to, they couldn't deal with it even if they feigned understanding.

But the message we, the people, can take away (without 20 percent VAT) is that the political classes are on borrowed time – if we believe we have the power to make it so. Yesterday, eighteen thousand people said so, and there are many millions more who can say the same.

UPDATE: When I wrote the above, I hadn't read this. The headline is misleading. Brendan O'Neill writes: "the vote tends to be less a positive endorsement of any clear-eyed political agenda than simply a 'screw you' to the three big parties which once claimed to represent the political spectrum".

Galloway, he says, is merely a beneficiary of the decay of politics as we knew it, which means that, far from representing a surge in radical Left-wing sentiment, his victory isn't that different to when a member of the BNP wins a seat on a local council or some UKIP suit gets sent to Brussels.