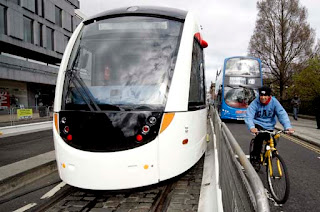 After a heated five hour debate, the final decision on the future of the tram project, to pursue a line to St Andew Square, was made on the basis of just sixteen Lib-Dim votes - a party which picked up just 627 votes in the Inverclyde by-election, with the candidate losing his deposit.

Furthermore, the "debate" was conducted without final details of a contract settlement being publicly known. With interest, the local authority will end up shelling a total of £420 million more of taxpayers' money, if it opts to repay the amount at £14 million a year over 30 years.

This brings the total cost of the new truncated scheme to a least £920 million (the details are very hazy about interest payments on the core £500 million). The 8.5 mile airport-St Andrew Square section of the line will thus come in at £1,700 an inch. This is only slightly less than the M74 extension, although cost per traveller mile is undoubtedly greater.

The point, though, is that there are many such examples in Westminster, and at local authority level. Elected and appointed officials are totally out of control. By no stretch of the imagination can this be government for the people, by the people. The very idea is absurd, yet there are many people (mainly politicians) who will tell you, with a straight face, that this is a democracy.  It isn't.  How can it be, when there is no mechanism for control?

That democracy can be conferred simply by graciously allowing the people to elect (some of) their rulers is one of the biggest frauds in the history of mankind. 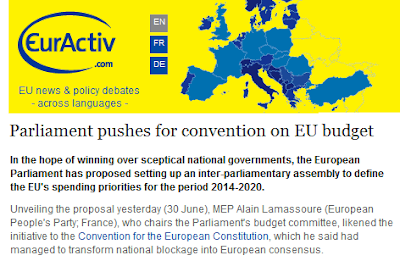 This is their idea of democracy (above) ... using the fig-leaf of elected office to by-pass the will of the people, and impose more costs on them that none, individually, would approve. We must start with controlling the money ... and move on from there. The only democracy is direct democracy. The rest is a sham. To believe otherwise is delusional.