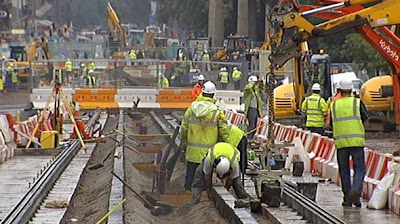 As the saga of the Edinburgh tramway continues, we now hear that councillors have decided on what they consider to be the least worst option – throwing more money at the project, rather than cancelling it.

Considering that cancellation will have cost taxpayers £750 million, the councillors seem to have come up with a completely new set of figures which allow them to claim that another, new, washes-whiter truncated scheme would only cost £774 million, and make an operating profit of £2 million a year. Whether that includes servicing the debt is not specified.

With a scheme that was supposed to cost no more than £500 million when it was approved, and is now running three years behind schedule, the public could be forgiven for taking a rather jaundiced view of the judgement of their civic leaders, the council being run by the Lib-Dims, who share power with the Scots Nats.

Breaking ranks, though, is the SNP's deputy city council leader Steve Cardownie. He opposes the scheme and has proposed a referendum, to allow the public to make the decision on the future of the tramway, rather than proven inadequate who run the council.

Needless to say, the idea has been rejected by the ruling élites. Cardownie says he was "obviously disappointed" by the decision, adding: "All options had a price tag but we maintained that the Edinburgh public should determine which one they preferred".

In a crucial statement, he then says: "We think it's inherently undemocratic not to give the Edinburgh people a voice in this matter. It's their money which is going to bridge the funding gap and it should have been up to them to decide".

And therein lie the tramlines of Referism. Cardownie is very clearly acknowledging that the confidence trick of allowing the public to elect their rulers – from a very limited gene pool – is not sufficient to confer democracy. What really matters is the power to control how the money is spent.

Control over the money is always at the root of power, which is why the EU is currently seeking ways of raising taxes independently of the member states. It is also why, if we are ever to have a functioning democracy, we the people must have a formalised right to decide on how much money is raised, and how it is spent.