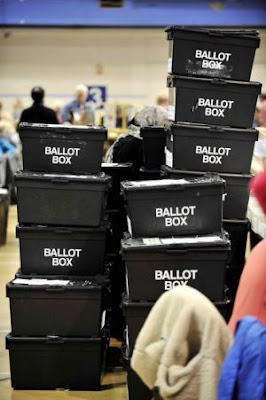 I've been meaning to do this (and much else) for a couple of days: via Autonomous Mind, we get the story from Mary Ellen Synon about craven Irish politicians sucking up to the EU with a special "Europe Day" in their parliament.

This is almost, if not actually, Stockholm syndrome, and underlines the truism that it really does not matter who you vote for any more – as in the recent general election in Ireland, the result is that you simply change the faces, not the underlying philosophy.

With local elections in many parts of the country today, much the same applies, only on a different scale. Here, local administration has largely been delegated to officials, led by a small cabal of councillors in what is known as the "cabinet system". With the bulk of the money provided by central government, and huge administrative areas, the idea of local democracy exists in name only and voting is mainly on party lines.

The supposed core of the democratic system, therefore, has been reduced to an almost (not quite) meaningless ritual, and they now want us today to vote in a referendum on changing a little bit of that ritual, pretending that the change will somehow improve the system as a whole.

Whichever way the vote goes, it will make no difference at all, where it matters – to which extent the vote is of supreme indifference. It has relevance only in that it might temporarily disconcert one or other of the political parties and their leaders.

Underlying the referendum is the arrogance of the politicians who, in ignoring our calls for a referendum on the EU treaty, believe we should address their concerns about adjustments to a voting system which will bring marginal benefits to one party (or not), but none at all to the people. Whatever the system, we still have the "Irish result".

The worst of it all is that in their contempt for the ordinary voter, much of the political class believed that we would be at all interested by their petty obsessions. By and large, we are not, so we go through their shabby little rituals – in diminishing numbers – driven more by habit and a sense of duty than any enthusiasm or belief that things will change.

The tragedy of it all is that so detached have the political classes become that they are no longer able to conceal their contempt for the ordinary people, yet have somehow convinced themselves that they are doing a superb job when they enthuse their own. They do not even begin to understand how loathed they are.

Unfortunately, for the moment, there is no alternative to them. As with a blocked drain awaiting the plumber, we suffer their stench because we have to. That will not always be the case, although none of us can predict the pace of change – when the plumber will arrive. The one thing of which we can be sure, though, is that if the classes continue to treat us with the contempt that has become their norm, the eventual retribution will be terrible – for them and all of us.