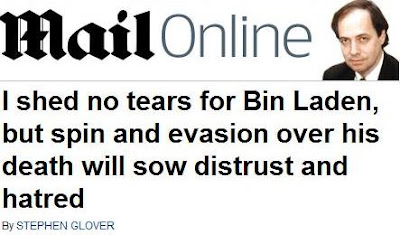 Republican Senator Lindsey Graham thinks that Obama's decision was a mistake. "The whole purpose of sending our soldiers into the compound, rather than an aerial bombardment, was to obtain indisputable proof of bin Laden's death", he says. "I know bin Laden is dead. But the best way to protect and defend our interests overseas is to prove that fact to the rest of the world".

But the further we go into this, the more dubious become the assertions. For instance, the DNA "evidence" gets even more insecure when explored by "Popular Mechanics". It tell us that one complicating factor in identifying Bin Laden is that he has no full siblings. "In the case of half-siblings, it is harder to state that there is a match because all one can do is state that it is likely the two people shared a common ancestor (you would not be able to say they are half-brother and -sister any more than you could say they are cousins)".

This is from Steven Laken, the CEO of DNA analysis firm Cephos, who adds that: "In the case of the bin Ladens, there may have been consanguineous marriages (marriages between related people), and this makes it trickier".

What this amounts to is that the DNA provides no certain measure of identification, and does nothing more than demonstrate a relationship with a familial group that certainly runs to hundreds and possibly thousands. Unless they have something more than facial recognition and the word of a "wife" who talked to the Pakistani authorities, then the Americans do not have enough to prove that they have Bin Laden.

We are, therefore, back in the faith business, with our world split between two basic type, the "believers" and the "evidencers". Of these, Atlas Shrugs believes that Bin Laden has just been topped, but still thinks the pics should be released. Veterans Today, on the other hand, are very much "evidencers", but go further then scepticism and assert unequivocally that Bin Laden has been dead for years. It was his frozen body that was deep-sixed.

Stephen Glover, in The Daily Mail, plays it right down the middle. The growing scepticism, he writes, is illustrated by demands that pictures of Bin Laden's body should be released. This would quell conspiracy theories that he did not die.

At least now, way behind the curve, one MSM writer is beginning to look askance at what is becoming a massive own goal, a completely unforced error – unless Obama and his team do have something to hide. And if they do not, why are they then behaving as if they do?

Earlier yesterday, however, before the theatre of the absurd took on its latest layer of unreality, even (or especially) the great sage Robert Fisk - the man who gave his name to "fisking" - was struggling to take this all seriously. But the Great Fisk was dipping his toes in the water, suggesting that the very sudden, totally unexpected death of this man in Pakistan whom they call Bin Laden should mean that all foreign troops can now go home from Afghanistan, saying "job well done".

Fisk is probably right. This is our exit ticket from Afghanistan. From now on, the propaganda will be all one way. We are making the situation worse, Karzai is a super-hero and can manage very well, the Afghan Army and police are reformed, and can win the war. And the Taliban are jolly good chaps anyway. It was all a misunderstanding.

And so the dreary little charade will play itself out. Give it two years, in good time for presidential election (and nicely timed to suit Cameron here), and the troops will be setting sail from Kabul, on their way home. What is more, the Americans will have the photos to prove it, the only ones we're actually going to get.