Honey! They stole my vote! 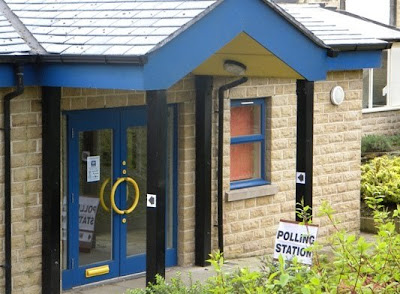 Well, I would have liked to have voted for my local council, but Bradford electoral services have screwed up and failed to register me and Mrs EU Referendum. Thus, on my arrival at the Polling Station, I was not allowed to vote.

Nonetheless, the kindly young ladies got on to the electoral offices by phone, to try and sort it out. On the phone, I made it very clear what I thought of Council officials stealing my vote, but with witnesses present and in a polling station, all can attest that I was polite and offered no threats to the lady I was speaking to, or to any of the staff at the polling station.

Anyhow, the lady at the "town hall" promised to find out what went wrong and ring me back. When she rang off, what she actually did was call the police. No less than three West Yorkshire crime fighters arrive - two little girlies and a big brave man with his stick and his flak jacket. But they were as puzzled as the rest of us at the polling station, where we are having a general conversation to while away the time, while we were waiting.

Only then does the slime ring back to claim that our application went in late, ignoring the fact that we had already sent in a request some months before. But the slime has spoken. Bradford Council has stolen our vote and are lying through their teeth about it - so we don't get to vote today. But, guess what ... they still want our money.

Lovely little system we have in this country. If they don't have a form every year from you saying you exist – or they manage to lose it – then they steal your vote. But strangely, you don't have to tell them you still exist before they send your Council Tax bill. And when you dare to complain about your vote being stolen, they call out the police.

Then, if you take the principle of no taxation without representation seriously, guess what they do? They put you in prison! Yay!

Welcome to the Fascist state of Bradford.