A book everyone must read 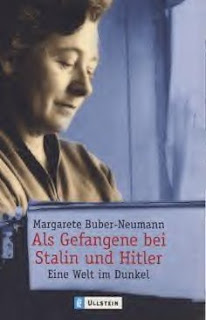 By everyone I mean everyone who is genuinely interested in the twentieth century's tragic history and does not think that small set-backs in development are catastrophic. Naturally, this does not include people who simply like the sound of their own voice (figuratively speaking, as one cannot physically hear them on the internet) and are proud of their own ignorance and hysterical outbursts.

The book in question is "Under Two Dictators" by Margarete Buber-Neumann, an astonishing lady. Born with the century in 1901 in Germany, she first married Rafael Buber, son of Martin Buber, the great Jewish philosopher, then secondly, Heinz Neumann, Stalin's trusted apparatchik in the German Communist Party.

In 1934 the two of them escaped to the Soviet Union. In the summer and autumn of 1937 Stalin launched a campaign against foreign Communists, many of whom, like the Neumanns, lived in the Lux Hotel. Others lived in their own flats but that did not save them. There were nightly raids, some of which, as Robert Conquest describes in "The Great Terror" turned into shoot-outs.

First Heinz, then Margarete were arrested and the first part of her book is a description of her imprisonment, interrogations and life in Karaganda, in one of the Soviet camps. Along the way she found out that her husband had been shot, though probably after the fictitious sentence of ten years without rights of correspondence.

In 1939 as part of the agreement with Nazi Germany, Stalin handed over all the German political prisoners and there is a tragic-comic description of their terrified arrival in the land of the Gestapo. The Jews were separated and sent off; the others were sent home with the proviso that they report regularly to the nearest police station.

Margarete was kept back for a very odd reason. The Gestapo officers in charge of the operation did not believe her story that her husband had been shot. Neumann, they reasoned, had been not just a Communist but one of Stalin's most faithful henchment. Nobody shoots his faithful henchmen. (Little did they know.) Therefore, Neumann must have been sent back to Germany on a secrete mission and the best way of finding that out is by imprisoning his wife in Ravensbrück.

So she spent the rest of the war in Ravensbrück, helping when she could, other prisoners and getting into trouble with the Communists when she tried to tell the truth about the Soviet Union.

Liberated at the end of the war she made for the American zone. As she was from Potsdam she ought to have gone back east but knew full well what would happen to her if she did.

The first English language edition of the book, which I read years ago, ended there. Now Pimlico has republished the book with a new introduction and some additional chapters about the period immediately after the war. Later on, Margarete Buber-Neumann wrote and lectured on the subjects she knew best. She wrote about her brother-in-law Willi Münzenberg, her friend Milena
Jesenská, Kafka's great love, murdered in Ravensbrück, gave evidence at the Kravchenko trial and, generally, fought the good fight.

I strongly recommend it to everyone who, as I said, is interested in the horrors of the twentieth century and in the degradation as well as the survival of the human spirit.
Posted by Helen at 10:40