Call it what you like, but it ain't democracy 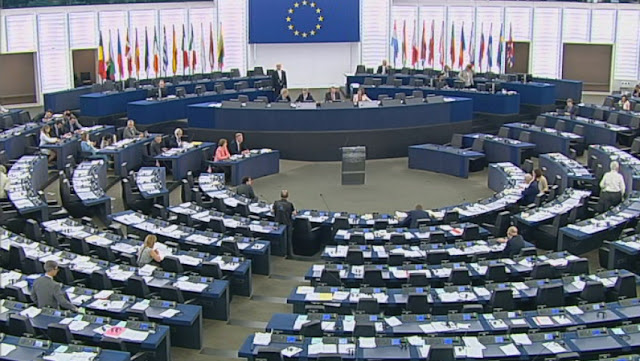 The EU is not a democracy. The true definition of a democracy is that the power resides with the people. Not by any measure can this be said of the EU. For starters, nobody in the Commission was elected, MEP's have no right of proposal, and if all our MEP's voted together, they could still not avoid being steamrollered by the EU. That's not simply outvoted - that's systemically outnumbered. 1.2 MEP's per million people is hardly representation either. Some argue that the council of ministers is made up of elected people, but that's neither here nor there. In effect it is a government the people cannot remove. At best we can have a partial electorally mandated cabinet reshuffle.

But it's about more than just the structures and the processes. They could tweak it here and there but it would still not change the nature of what the EU is. The EU is an artificial construct in every way. In terms of a European demos (a people), there is no such thing. Hardly anyone can name political grouping in the European parliament and in most instances, unless there's a juicy drama like the Greek crisis, it is often second rate news or treated as foreign news. To all intents and purposes the EU is a government yet it is not reported as such. Pan-European politics doesn't exist.

There is no single common European identity, history or language either. The European demos is a construct that simply doesn't exist in the same way it does for a nation like the UK. We have an island story, a shared history, a common language, a national character and a shared identity. That's a demos. Whatever concoction the EU has fabricated is less a demos as a political partition.

You can't simply print some bank notes, create a flag and sing an anthem to create a demos. It's been tried before but it doesn't work. There is no EU demos on which to base a political union. It exists only in the imagination of a small minority of EU federalists. Even European elections are couched in terms of domestic parties - and serve mainly as an opinion poll on the national government and the EU as a whole. Hardly surprising then that the public in the main would return UKIP MEPs. The EU lacks legitimacy, the public knows it and the Euro votes are an opportunity to say so. They know that power without a demos is simply tyranny and a demos without power is not democracy.

Moreover, the EU has only ever come this far by lying to its peoples about what it really is. Even today the arguments against Brexit revolve around the three million jobs that supposedly depend on the EU. Course, as we know, the EU is not the single market - but rather than telling an outright lie, it perists in massaging public ignorance about the nature EU - which is effectively the same thing. The EU is happy to remain an obscure and fringe concern to national politics. If the public knew what you and I know, the No camp would be looking at an easy win.

But it's actually not good enough to complain that the EU is not a democracy. The notion that we should "reclaim parliamentary sovereignty" overlooks that it was parliament who did this to us in the first place. Maastricht ratification on occured on the back of threats, three-line whips and brinkmanship, in a parliament of politicans whose own mandates are far less that 30%. Not forgetting, without separation of powers, our entire parliamentary system is designed to secure the obedience of MPs. Why else would we have so may ministerial posts? 119 since you ask.

Even the Lisbon treaty was never put before the people - This the treaty that effectively abolished the entity we voted to join to establish something entirely different. This when 64% of people wanted a referendum on it and well over 50% would have voted to leave altogether. The treaty never went to a referendum and was instead carried by a large parliamentary majority. If that's what representative democracy looks like, I'd hate to see what it looks like when it's unrepresentetive.

The purpose of a referendum is to secure legitimacy for decisions where Parliament alone can not secure that legitimacy. It can't in these such instances. With only small mandates, themselves in hock to an SW1 bubble mentality, MPs cannot be trusted with such extraordinary decisions.

But here we are, in an undemocratic political union, sold to us on a lie, rammed through with neither consultation or consent - at the fag end of a fading labour government. This is why this blog has always maintained that the UK is not a democracy either. Commentators confuse process and ritual and voting traditions with democracy. By definition democracy means that the people hold power, yet we rarely see any instance where the people wield power.

Given how few powers councillors have and how restrained their decisons are by Whitehall and Brussels, it would be fair to say there is no actual democracy anywhere in the system. We have a benign managerialist dictatorship - and our occasional elections are little more than opinion polls. A change of guard seldom produces meaningful change. The charge that "they're all the same" isn't unjustified. They're not all the same, but the way the system is rigged, the outcomes are often the same either way.

By every measure that the EU is considered undemocratic (unelected commissioners etc) we must apply that same logic to our own system. After all, our own system resulted in a Conservative win primarily because of Ed Miliband's lack of personal appeal. Like it or not, parties are elected on the basis of their leader. But who actually voted for their own constituency MP? And who actually voted for the Prime Minister?

When it comes to more local concerns, we've been front and centre in the fight against wind turbines. We never wanted them, but were forced to have them anyway. It took ten years for the government to "allow" local councils final authority over them. But the fact such powers are gifted from the centre is yet more proof that the power does not reside with the people, thus by definition we are not a democracy. Similarly, with "DevoManc", as I understand it, Manchester is about to get a mayor it does not want to preside of a region that doesn't technically exist and nobody asked for.

The accepted definition of democracy is that we have a vote once in a while, and somebody who is returned on less than a quarter of the vote is free to make decisions for us. One man or woman supposedly represents the hopes, needs and aspirations of seventy thousand of us. The Commons model is not all that far removed than when it was a talking shop for rich barons from the regions to discuss their own narrow concerns. That's ultimately why we argue that proportional representation won't make a difference. Representative democracy just isn't democracy at all.

We believe that Brexit, while inherently desirable does not "restore democracy". We cannot restore that which we have never had. Thus Brexit is merely the first stepping stone to democracy. Being ruled from London is little different to being "ruled" by Brussels. In ether case we are still ruled and both are remote from the needs of the people they supposedly serve. Arguably London is further detached from us since SW1 culture is barely aware of anything outside its own self-referential claque. They genuinely see themselves as an elite.

It seems our first concern is to educate the public in what democracy is and what it looks like. If we can do this then they will conclude for themselves that neither Westminster or the EU is democratic and start demanding real change. Leaving the EU is only the beginning.
Posted by Pete North at 20:21