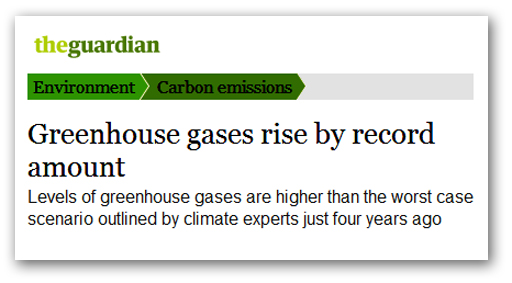 At every possible level, the campaign to address the putative threat of global warming has been a failure. The world pumped about 564 million more tons of carbon (dioxide) into the air in 2010 than it did in 2009, an increase of six percent. That amount of eclipses the individual emissions of all but three countries, China, the US and India, the world's top producers of classified emissions.

It is a "monster" increase that is unheard of, says Gregg Marland, a professor of geology at Appalachian State University, who has helped calculate department of energy figures in the past. And so do we hear the laments: "The more we talk about the need to control emissions, the more they are growing," says John Reilly, the co-director of MIT's Joint Program on the Science and Policy of Global Change.

As we see the world slip into a cooling cycle, the great tragedy is that we do not have the politicians with the wit and courage to admit they are wrong, and row back on the accumulated stupidity and waste which marks twenty years of policy failure.